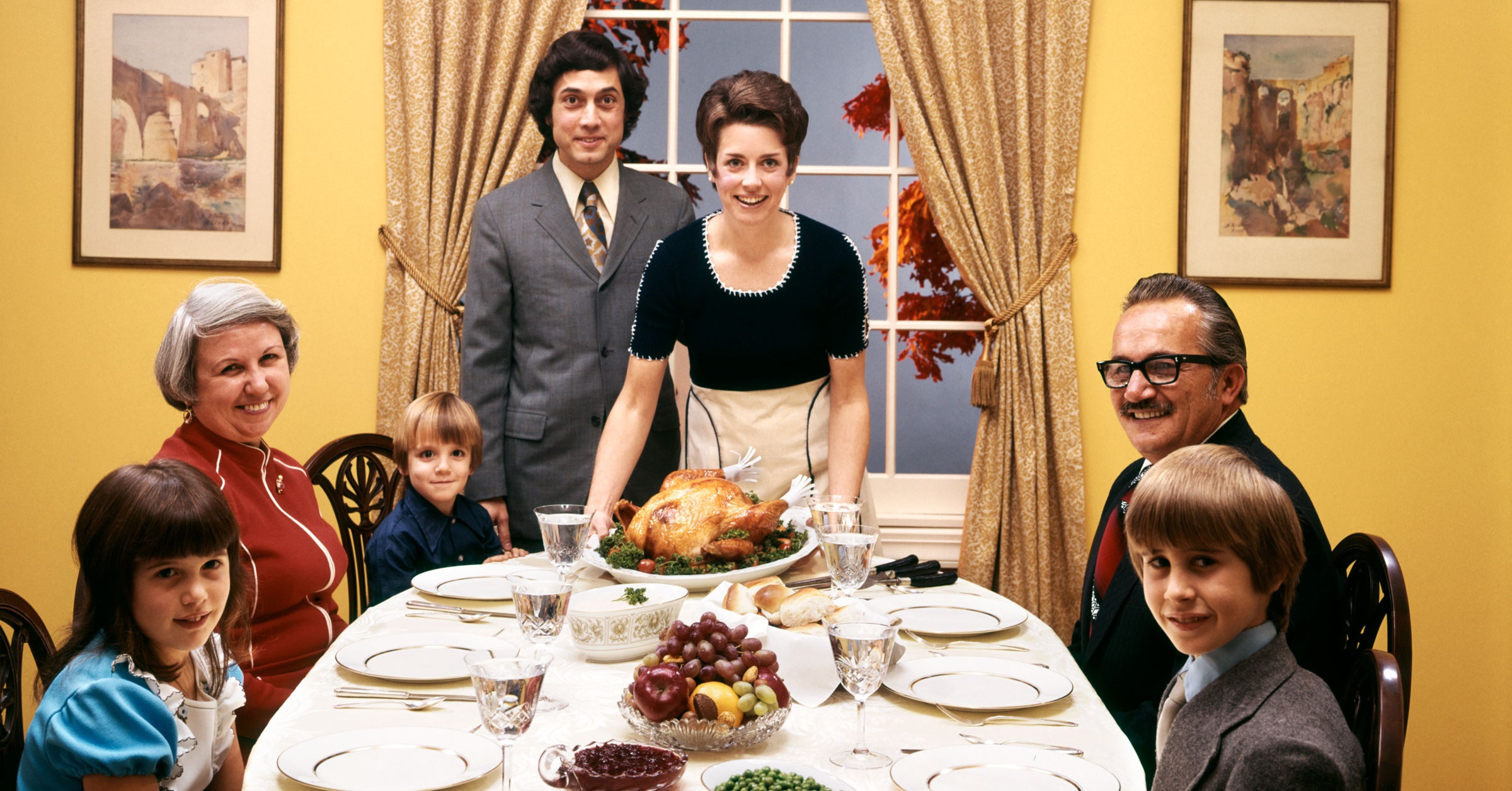 Nike, Colin Kaepernick, and the Changing Role of the Athlete

Politics. Aunt Diane’s secret marriage. LeBron James vs. Michael Jordan. Nothing is off the table when families bicker during Thanksgiving—except maybe a thrown wineglass. Grievances are aired, harsh words are said. Sometimes not even pie can soothe the wounds.

Such tense repasts aren't confined to Turkey Day, of course. Especially not in pop culture, where dinner table spats are as common as laugh tracks. Dysfunctional families don't need a mass observation to prompt awkward, down-and-dirty dinner squabbles—and those pedestrian pathos-fests are often more entertaining (or more cringe-inducing) than the holiday ones. So in honor of this Thursday's festivities, we here at WIRED decided to honor a few of our favorite disastrous dinners and foul-mood feasts. So try to enjoy your own family's drama with a new perspective; it can’t be as bad as these.

An extended play on the Hitler time-travel paradox , The Last Supper concerns itself with a community of young liberals who start inviting conservative leaders to dinner and—you guessed it—concerning themselves with whether or not it’s morally right to off them. In other words, they’re the worst or best dinner parties around, depending on how you view their actions. In retrospect, this one is a little overwrought, but it’s worth it to see Cameron Diaz in one of her very first films.

9. Brad Pitt Shows Up on Friends

Much like Will’s overconsumption of yams, this one is kind of a cheat since it does take place on Thanksgiving. Over the years Friends had many Turkey Day episodes—”The One with All the Football” prime among them—but this one was probably the buzziest since it featured a cameo from megastar and then-Jennifer-Aniston-paramour Brad Pitt. In the episode he plays the aforementioned Will, a former high school classmate of Monica, Ross, and Rachel who got hot in the years since they graduated. He hasn’t forgotten, though, that Rachel (Aniston) used to treat him poorly because he was an overweight uncool kid. The humor, of course, is derived from watching Pitt actively hate Aniston—a pair that at the time was the It Couple. The problem, though, is that it’s revealed that Will and Ross started a rumor about Rachel in high school that she was born intersex and raised as female at the insistence of her parents. What ensues is a string of jokes at the expense of intersex and trans folks. There’s also a fair amount of fat phobia and fat-shaming too. It’s a nightmare Thanksgiving all around.

Looking back, American Beauty perhaps didn’t deserve every bit of praise it got, but of the worthwhile scenes that are still nestled in fans’ memories is this one. Lester Burnham (Kevin Spacey) has just quit his job, and his wife, Carolyn (Annette Bening) is none too pleased. As their daughter, Jane (Thora Birch), joins them for dinner a fight erupts in which Lester, who has consistently been asking for someone to pass the asparagus, grabs the plate himself and smashes it against a wall. Neither the film nor Spacey’s career has aged well, but this scene is still a fascinatingly grotesque display of suburban selfishness and toxicity.

In one of Mad Men ’s thinner plot lines, Betty Draper/Francis (January Jones) gained weight after she split for Don (Jon Hamm) and remarried. Her response was to join Weight Watchers and deny herself lots of food. (The plot, I think, was supposed to convey something about Betty’s struggle for control, but it only ever kind of clicked.) The worst point in this storyline comes during a Thanksgiving in which Betty says “I’m thankful that I have everything I want and that no one else has anything better” before chewing single bites of each Thanksgiving dish. :(

6. The Purple Wedding, Game of Thrones

No matter who is left standing when Game of Thrones ends next season, they will have done it by knowing how to survive—or avoid—weddings. While the majority of foot soldiers die in battle in Westeros, the nobles almost always get offed at banquets. Case in point: Joffrey Baratheon. After nearly four full seasons of being the absolute worst, the boy king was poisoned almost immediately after his marriage to Margaery Tyrell. It was easily one of the most satisfying things to ever happen on Game of Thrones . At the time, his uncle Tyrion Lannister was blamed for killing him, but it was later revealed that her grandmother Lady Olenna Tyrell was behind it.

5. Thanksgiving in The Ice Storm

If you remember anything about Ang Lee's 1997 flick The Ice Storm , you probably remember that it as the movie with the key party where everyone makes really poor decisions. What you might not remember is that it all took place over Thanksgiving weekend and that before things went south (and they do go very, very south), the Hood family had a Thanksgiving meal during which their daughter Wendy (Christina Ricci) says, "Dear Lord, thanks ... for letting us white people kill all the Indians and steal their tribal lands." Now, this might not seem that awful—or that off-script from anything that happens at your family Thanksgiving—but considering what happens later in the film, it gets a spot on this list.

4. The In-Laws Dinner in The Birdcage

So, there are awkward family dinners and then there are the times when your very conservative parents meet your fiancé’s gay dads. The Birdcage contains the latter. Except in this version, one of the dads, in an attempt at heteronormativity, attends the meal as a woman. It goes pretty well—until someone notices that the plates may or may not depict scenes of sodomy. (They do.)

First of all, can we just say: Beyoncé really knows how to lay out a spread. That, or someone who works for her does. In the video for “Jealous,” off of her self-titled 2013 album, she stands around table laid out with a full meal—complete with candelabras—awaiting her absent lover (presumably Jay-Z). The whole scene is, naturally, flawless. Then, as Bey gets more and more upset that her love hasn’t come home for the meal she’s prepared, she swipes the dinner, candles and all, onto the floor in anger. The video itself concludes with a happy reunion, but presumably not everything was settled considering Yoncé was turning lemons into Lemonade three years later.

2. The Mashed Potato Mountain from Close Encounters of the Third Kind

There are a lot of poignant scenes in Steven Spielberg’s 1977 alien-contact flick, yet few are as wrenching as the family dinner in which Roy Neary, haunted by a recent UFO sighting, begins making a mountain out of mashed potatoes. The vision he was trying to recreate all makes sense by the end, but in that moment, as Roy and his family struggle with the fact that he might be having a breakdown, nothing is OK. It’s jarring and unnerving—and totally enthralling.

1. The Red Wedding, Game of Thrones

Remember that thing in #7 about weddings on Game of Thrones ? Well, this is the one that came first and puts the death of one little Joffrey Baratheon to shame. At the behest and planning of Tywin Lannister, Walder Frey (and pretty much all of House Frey) turn on Robb Stark, his pregnant wife, and his mother Lady Catelyn, slaughtering them in a manner that gives the phrase “in cold blood” all new meaning. The worst part—or, well, the second worse part after all the dead Starks? Arya Stark, long separated from her mother and brother, had finally found them, only to see the massacre unfolding from afar and to have to escape and head out to fend for herself all over again.