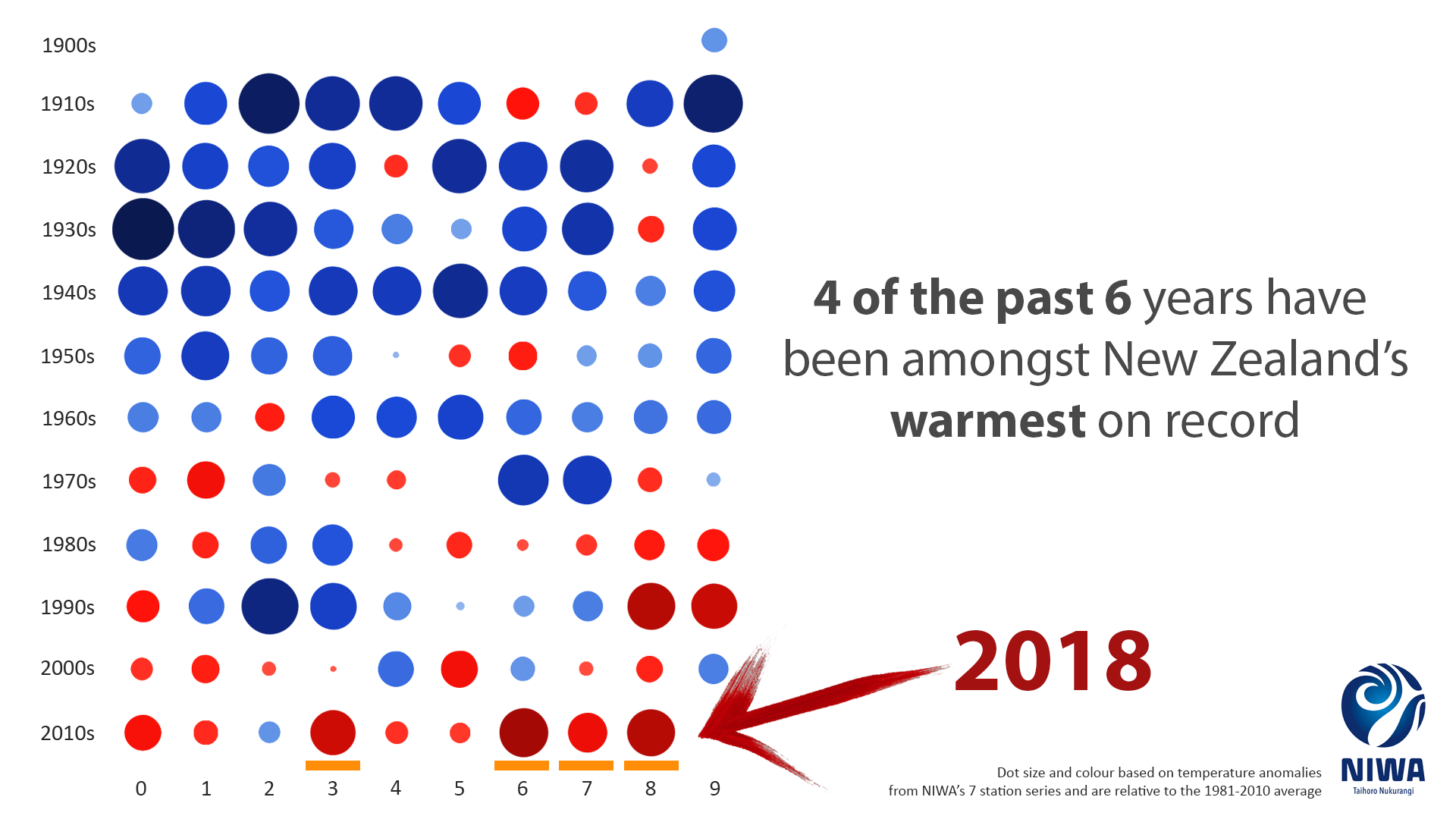 Earth was on fire last year (in case you forgot), with record-breaking West Coast wildfires , Siberian heat waves , and Atlantic hurricanes . Now government scientists have crunched the numbers behind the planetary chaos.NASA just released its yearly report on annual temperatures, and it says that 2020 surpassed or tied 2016 as the hottest year on record. A similar announcement by the National Oceanic Atmospheric Administration (NOAA) differed slightly, saying 2020 came in a close second or third. Both agencies presented their findings on Thursday during a virtual town hall at a meeting of the American Meteorological Society. The two agencies released their findings together, although they used slightly different methods to calculate their results.

The previous record for the hottest November on record was jointly reached in 1954 and 2013 when the temperature was 1.38ᵒC above average.On 27 November, Wairoa recorded a high of 34.1°C, the equal fourth-highest November temperature on record in New Zealand.

The new federal data show that the Earth’s atmosphere has now warmed 1.2 degrees Celsius (2.2 degrees Fahrenheit) since preindustrial times and is adding another 0.2 degrees C (0.36 F) per decade. At this rate, researchers expect global temperatures to surpass the 1.5-degree Celsius limit set by the 2015 Paris Climate accords by 2030. “I don’t think there’s much going to happen that will change that, barring a massive volcano,” says Gavin Schmidt, director of NASA’s Goddard Institute for Space Studies, which released the atmospheric data along with NOAA. (Dust and ash particles from erupting volcanoes can reflect sunlight and have a cooling effect on the atmosphere, albeit a temporary one.)At the same time, a separate group of US, Chinese, and Italian climate scientists reported this week that the world’s oceans achieved record warmth in 2020. The study showed that the oceans absorbed 20 zettajoules (1021 joules) more heat than in 2019, and they contain the highest thermal content since the baseline of record keeping began in 1955. The total amount of increased ocean warming over the year is 61 times all the electricity generated around the world in the same time, according to Kevin Trenberth, an author on the study. This heat was absorbed from the Earth’s atmosphere and fueled Pacific Ocean “super-typhoons ,” intense rainfall events across the US, and changes in marine ecosystems such as harmful algal blooms and seal pup strandings. That study, in the journal Advances in Atmospheric Sciences, collected measurements from moored ocean buoys, floating drifters, and shipboard instruments.

“During summer, heatwave conditions scorched our seas for the second consecutive year, while several areas of the country suffered ongoing drought conditions, including Nelson-Tasman where prolonged wildfires occurred and a state of emergency was declared,” says NIWA meteorologist Ben Noll.

Scientists who worked on both the atmospheric and ocean studies say that human-produced carbon emissions are to blame, and that the warming has been driven by the burning of coal, oil, and natural gas. “The overwhelming cause of the warming we have seen is the increasing greenhouse gases,” says Schmidt. “Almost all the trends over this period are attributable to human activity.”

In their atmospheric report, the two federal agencies stated that the planet’s six warmest years on record have been the six years since 2015. The 10 warmest have all occurred since 2005. “Whether one year is a record or not is not really that important,” Schmidt says. “The important things are long-term trends. With these trends, and as the human impact on the climate increases, we have to expect that records will continue to be broken.”

In 2020, the US also broke records for the number of storms that caused at least $1 billion in damages, with 22 such weather disasters. The previous record was 16 disasters in both 2011 and 2017.

People who understood that human activities were warming the planet were more likely to perceive weather events as being related to climate change.