For the latest updates on Hurricane Florence, read our Friday live briefing here.

At the same time, residents and emergency personnel throughout inland North and South Carolina were working under the grim assumption that the Category 1 storm’s pounding of the coastline would be only the first powerful punch in a fight that could go many rounds and last for many days. It will play out not only among stilted beach cottages and seaside resorts, but also in workaday towns and cities much farther west.

“This may be the first time we’ve experienced such a two-punch from these kind of conditions,” said South Carolina’s governor, Henry McMaster, at a news conference on Thursday, speaking about evacuations along the coast as well as the possibility of rain-triggered landslides in the mountains.

Florence is proving to be a lumbering giant, with cloud cover as large as the Carolinas themselves. If, as expected, it dawdles over the region, the storm could drop rainfall of 20, 30 or even 40 inches in some areas. Anxiety is especially high over the fate of all of that water, which will have to go somewhere.

That means a cascading series of complications for a cities like New Bern, the state’s first capital that sits at the intersection of the Neuse and Trent Rivers, and Greenville, N.C., a handsome college town of 92,000 people set on the banks of the Tar River.

On Friday morning in New Bern, the heavy rains had already caused flooding on the Neuse River. Some 200 people were rescued from flood-marooned homes overnight in the city, the mayor, Dana Outlaw, said. Emergency rescue teams were trying to reach about 150 others still trapped in cars, on roofs and in their attics.

Greenville lies far inland, a few score miles west of the Atlantic Ocean, but it is connected to the sea by the Tar River, which eventually becomes the Pamlico River as it widens out and flows into the Atlantic.

But he said the city was also worried about a massive salty storm surge roaring westward up the river from the Atlantic. Finally, there is the problem of all the rainfall on the rest of the state, which would have to eventually drain eastward out toward the ocean.

City and county officials have stationed swift-water rescue groups in place, including teams of wildlife officers from Indiana. Police have begun going door to door in the lowest-lying areas suggesting that residents get out. Some 300 people were already using five Pitt County shelters.

But Mayor P.J. Connelly said that the river flooding might not occur for days, if at all, given how capricious the storm’s track had proven to be. For the moment, the future for Greenville seemed as though it was written on water.

“A lot of what we do afterward is based on what the storm brings,” Mr. Connelly said, “which could be a lot of uncertainty.”

[Are you in the path of Hurricane Florence? We want to hear from you.]

The drama was considerably more tangible on Thursday in the coast-hugging city of Wilmington, N.C., where, at midday, winds whipped ocean spray across sand dunes on nearby barrier islands. City streets began to empty as residents made final preparations. The storm made landfall at 7:15 a.m. Friday near Wrightsville Beach, on Wilmington’s eastern shoulder.

“The winds of Hurricane Florence are upon us,” said Steven Still, director of emergency management for New Hanover County, which includes Wilmington. He said the winds would “stay with us for a considerable period of time."

Emergency officials said they were particularly concerned about the powerful storm surge, predicted to reach 9 to 10 feet on North Carolina’s barrier islands, possibly producing dangerous flooding of rivers, bays, sounds and estuaries throughout the region.

Officials continued to urge people to stay inside their homes and to leave low-lying areas prone to flooding.

“We’re not going to be able to come out and get you if you have an emergency during the storm,” said Mayor Bill Saffo of Wilmington.

Mr. Saffo warned that the effects of the storm could last for several days or more, with widespread power outages, flooded roads and homes, and mountains of windblown debris.

“It’s going to pound us for quite some time,” he said.

In South Carolina, state officials urged residents to follow evacuation orders as the storm begins to make landfall and to take Florence seriously, even though its winds had weakened some.

“These are your last few hours of safe evacuation,” said Katie Geer, a spokeswoman for the South Carolina Department of Insurance. “You should not pay attention to the category of the storm. Just because it’s weakening does not mean it’s not posing a serious threat.”

Authorities said 3,917 people have moved into shelters in South Carolina, with three shelters completely occupied. The state still has space for more than 31,000 people across 60 shelters.

Rick Luettich, director of the University of North Carolina’s Institute of Marine Sciences, who has a front-row seat for the storm in Morehead City, N.C., said that the story of Florence would almost certainly play out in other areas further inland.

“We think about the front-facing beaches, and those are the front lines,” he said. “But they oftentimes have sand dunes and other protections that can hold.”

“As you get up into the estuaries, as you work your way up into the coastal plain, there’s no defense,” he said. “The water from the ocean backs up into those systems.”

Some areas that may feel they were spared when the hurricane first passes might experience serious flooding from the winds on the back end of the storm, which will still be pushing water up into the crenelated North Carolina coastline.

In Greenville, although some residents have been asked to evacuate their homes, there are others — perhaps hundreds of them — who might not be advised to leave until long after the hurricane is gone and the water finally comes flowing back down the Tar River, headed for the ocean.

“We’ve got time. We’ve probably got about a week, which seems strange,” said Eric Griffin, the fire rescue chief for the city. “What you will have is, the storm will come through, it’ll be nice and sunny and bright, and all of a sudden you’ll say, well, ‘What’s going on?’ And we’ll say, ‘The water’s rising.’ And the water rises pretty quickly. You could see maybe a foot every couple of hours or so.” 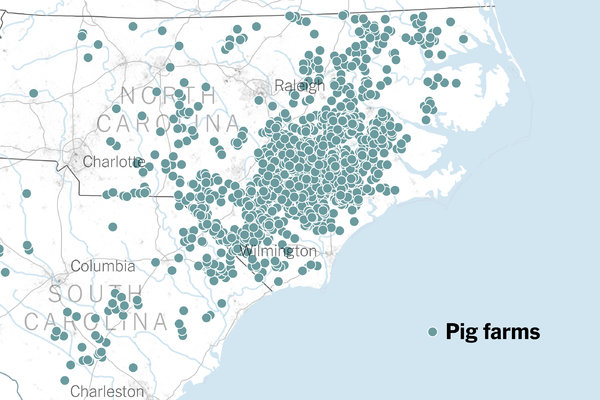 Hurricane Florence is bearing down on the Carolina coast, raising environmental concerns about Superfund sites, coal ash ponds and thousands of hog farms with lagoons full of waste.

Mr. Letchworth, the city spokesman, said the possibility of immediate flash flooding seemed to be getting worse in recent years, the result of a building boom spurred in part by the expansion of the 29,000-student East Carolina University. That has meant more pavement and other impermeable surfaces, he said, and more places that flood that have not flooded before.

The school canceled classes earlier this week, in part to encourage students to go home. But a few people were still to be found Thursday in the Grid, a neighborhood dense with student housing.

Around lunchtime, Steven Swank, 23, was packing a few cases of water into a little sedan. In 1999, the Grid was inundated by river flooding after Hurricane Floyd, and Mr. Swank wanted none of it. He and his girlfriend were going to his sister’s house for a while.

“She lives over behind the Cracker Barrel, not near any water,” he said. “We don’t want to be stuck here.”

Worries were running equally high in inland South Carolina. Fifteen miles northwest of the gaudy spectacle of Myrtle Beach sits the quiet county seat of Conway, a nearly 290-year-old town shaded by live oaks and straddling the Waccamaw River. Time and again — in Hurricanes Floyd and Matthew, to name just two occasions — Myrtle Beach has been spared the worst damage, while Conway has taken a heavy hit: flash floods with the storm itself, then river floods in the days that followed.

“The water collects really quickly, and people think that’s the flooding, but it’s flash flooding,” said Le Hendricks, the Conway fire chief. “That goes down pretty quick, and then they think they’re free. But then what happens is, the Waccamaw River gets backed up.”

Chief Hendricks described a kind of hydrological traffic jam: Water trying to leave the Waccamaw meets flooded waterways and a surging ocean at capacity. The river has nowhere to go but over its banks, onto highways and roads and into people’s homes.

This kind of flooding might not happen at its worst until two days after the hurricane hits, but when it does, the water can sit for weeks. Meanwhile, places on the coast might have already begun rebuilding from any damage wrought by the winds and the initial surge.

“Myrtle Beach, they did fairly well during Matthew,” Chief Hendricks said. “They had damage but were back up and running within a couple of days.”

Conway, at first, thought it had dodged a bullet, as well, he said. “But it was the flooding. And it took about 18 days for us to get back out of that.”