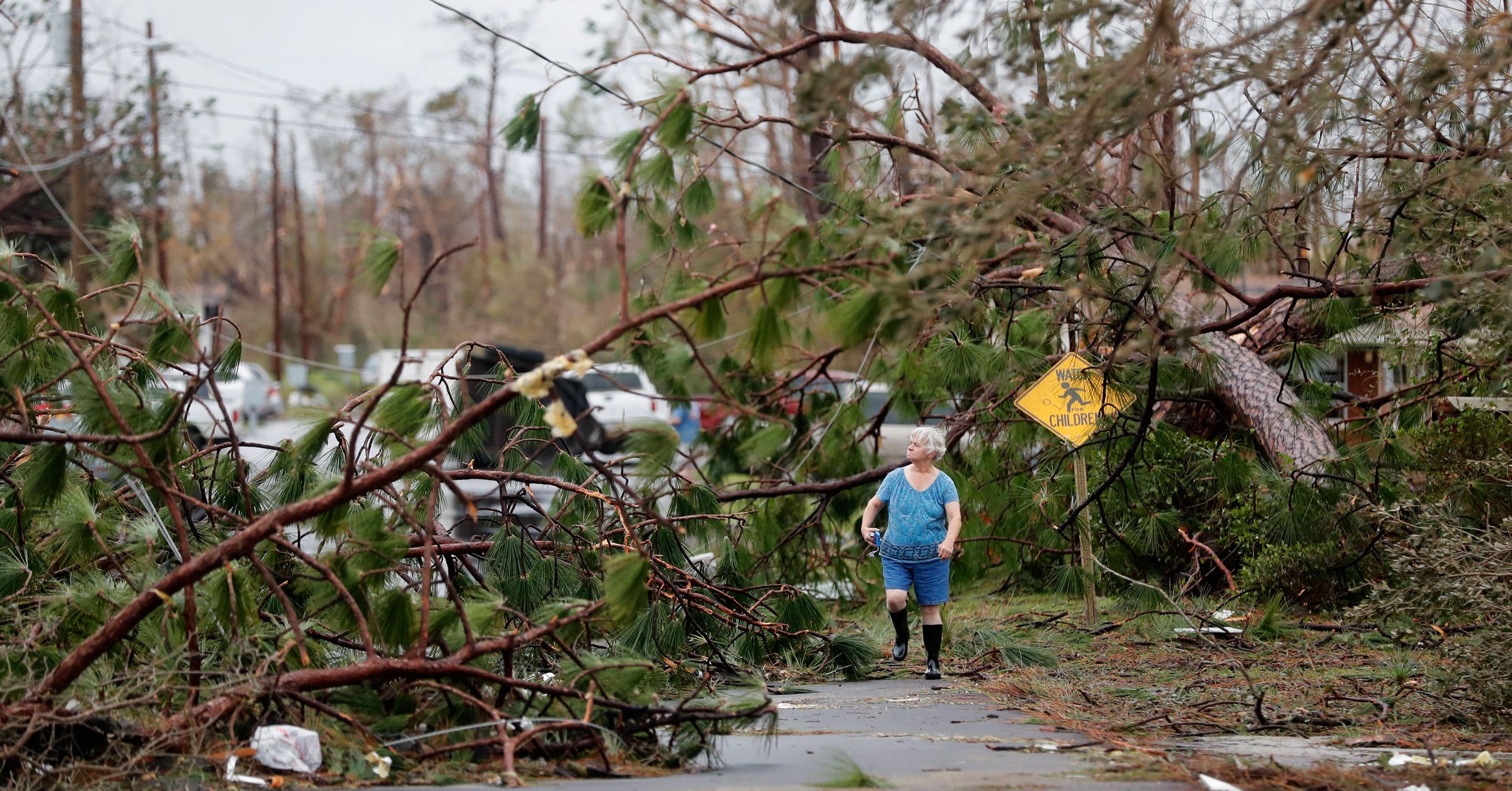 It wasn’t a whodunnit. Last year’s unprecedented rainfall and flooding in Houston were the proximate result of Hurricane Harvey, a massive storm born northeast of Venezuela and reborn in the Gulf of Mexico, where it rapidly intensified, made landfall over Houston, and then stayed—parked, as it were, for five days.

Harvey was, however, something of a why dunnit. Why did the storm drop more than four feet of rain on the city? Hurricane-climate-change-planet-on-fire, yes, stipulated. But new research suggests that the fault was not only in our meteorology, but ourselves. The city—the fact of its city-ness, of its raw Houstonosity, may well have made Harvey’s rainfall worse. And the implications for coastal cities in a Burning World are, at minimum, very wet.

Hurricane Harveys hardly ever happen over Houston, one might say—in the late 20th century it would’ve been a 2,000-year storm. In 2017, Harvey was six times more likely. Climate change theory also predicts more rapidly intensifying hurricanes that move more slowly and drop more rain—just like you-know-who. This is thanks to humans burning carbon-based fuel and coughing the leftovers into the atmosphere. Very bad! Look at what you did! Bad! No more treats.

Cities around the world are getting bigger, especially along the coasts. Just a shade more than one percent of the continental United States is city , but it’s where a vastly greater proportion of people live, and the land dedicated to cities is only going to expand. That land use has a disproportionate effect on climate and ecosystems. Paved ground is mostly impervious to water, an impermeable surface between earth and sky, which means water that falls on it as rain or snow has to run off and away, somehow—cities are, in their deep souls, machines for moving fresh water in and used water out . Something like 35 percent of precipitated water turns into runoff in a city, versus 15 percent over unpaved land. That’s why flash floods are more likely in cities.

Another consequence of city building is the so-called urban heat island effect. The air over cities is hotter than over not-cities, changing atmospheric circulation patterns. It seems like urban heat islands have even caused or worsened thunderstorms over cities, including a particularly bad cluster in Beijing in 2006.

Still, though, Harvey was so extreme that it warrants more running of the numbers. “There was nothing looking at how the urban area interacts with a tropical cyclone or a hurricane—the role of the city, not just from a hydrologic or meteorological perspective, but both,” says Gabriele Villarini, a civil engineer at the University of Iowa. “We said, what if we replaced the urban area of Houston with cropland?” Using a system called the Weather Research and Forecasting model to simulate climate and its changes over a region (as opposed to models with lower resolution but wider geographic scope), that’s actually possible. The WRF includes a parameter for land use; in a paper in Nature today, Villarini’s team tweaks that knob between cropland and Houston, and runs Harvey again and again.

More specifically, they ran the model with all of Harvey’s observed initial conditions, to see if their simulated cyber-Harvey acted like the real deal over a Houston modeled with low- and high-density residential areas along with denser commercial spaces. The digital storm broadly did what the real one did; it rained hard. Then Villarini’s team razed the digital city and replaced it with sylvan cropland, and let Harvey unfold again. Total rainfall went down by almost two feet in some parts of town, or what would’ve been town. “We were able to quantify the enhancement due to the urban areas. Then the question was, OK, why?” Villarini says. “What we found is that there is a role due to urban roughness. As the flow from the storm approaches the city, it becomes rougher, the buildings and overall footprint.”

That roughness, an increase in drag, grabs the storm from the sky, like a person in socks skidding across a hardwood floor suddenly meeting a shag carpet.

Coupled with the urban heat island effect, that slowdown pushes the bottom of the boundary layer—the part of the atmosphere in contact with the ground—upward. Updrafts increase. Airflow converged more “upstream” of the city, in this case Houston’s east side. “These are all ingredients for heavy precipitation,” Villarini says.

What you might then ask is, that’s fine for a simulated city and simulated crops, but what exactly is it about a city that’s increasing the roughness? Tall buildings or sprawly, low strip malls and housing developments? Nobody’s sure. It’s true that forested land—tall trees—have an overall drag coefficient somewhere between city and farm. Buildings with different shapes, at different angles versus the oncoming wind, change a city’s overall drag coefficient. “Was it a special combination of Houston and Harvey? Was it about Houston? Was it about Harvey?” Villarini says. “I don’t know how these results translate to other areas. It would also depend on where a storm made landfall and its intensity.”

Cities, then, affect their own weather in complicated ways. Last year, researchers correlated rainfall and air pollution across China for the last seven decades, and found that urban pollution particularly made for more rain . So the Villarini group's finding came as something of a validation to Xuemei Bai, an urban sustainability researcher at Australian National University who worked on that China study. "This is an important study that uses a physical model to establish urbanization can exacerbate heavy rainfall," she says. "The fact that this [new paper] is dealing with one of the most well-known flooding episodes really strengthens its communication power."

It’s also a new way to think about cities and hurricanes, specifically. “This is, as far as I know, a new result and, as the authors point out, has important implications for urban planning,” says Kerry Emanuel, a climate scientist at MIT who specializes in hurricanes.

Teasing those implications out will have to come next. Climate theory takes as fairly certain, now, that denser, taller cities emit less carbon than sprawling, flat ones. But what if they also exacerbate rainfall? Urban planners are already trying to account for sea level rise and the kind of flooding that happens when storm surges meet runoff in aging city sewer systems; Villarini’s finding says that the literal shape of the city itself is a factor in the weather it encounters.

Climate scientists are already mounting the evidence that human behavior has exacerbated hurricanes. In another article in the same issue of Nature , researchers used the same WRF model as Villarini’s team to tease out the “anthropogenic influence” on a few big hurricanes—the degree to which the carbon we humans emitted made the storms worse. Hurricane season last year killed at least 251 people—probably more, but it’s hard to know because of the Puerto Rico undercount—and caused $265 billion in damages. The question remains: Why? Why did it get so bad?

The scientists took three iconic hurricanes—Katrina, Irma, and Maria—and ran simulated versions of them against two sets of conditions: a pre-industrial, non-globally warmed climate (for comparison to what actually happened) and three post-globally warmed futures of varying severity. And as theory said it would, climate change increased all three storms’ rainfall, and the effect increased with future warming. The same thing happened with 12 other modeled hurricanes as well. “We see the majority of the 15 events becoming stronger in terms of wind speed and producing substantial increases in rainfall,” says Christina Patricola, an atmospheric scientist at Lawrence Berkeley National Laboratory. “It’s not great news.”

That bad news does help solve the mysteries remaining. Scientists are pretty sure who’s responsible for making hurricanes worse—it’s you, me, and the governments and corporations around us. They’re learning the why and the how , even if it might feel improbable that people will be able to reimagine a society to stave off the worst impacts of climate change. They’ll have to. As a great detective once said, when you eliminate the impossible, whatever remains—however improbable—must be the truth.