While people can move out of harm’s way as Hurricane Florence advances on North and South Carolina, their structures remain behind to face the storm’s full force. In the Carolinas this means not only homes, schools and towns but ponds of coal ash, Superfund sites, chemical plants — and thousands of industrial hog farms with lagoons filled with pig waste.

Here is where the danger lies, and why: 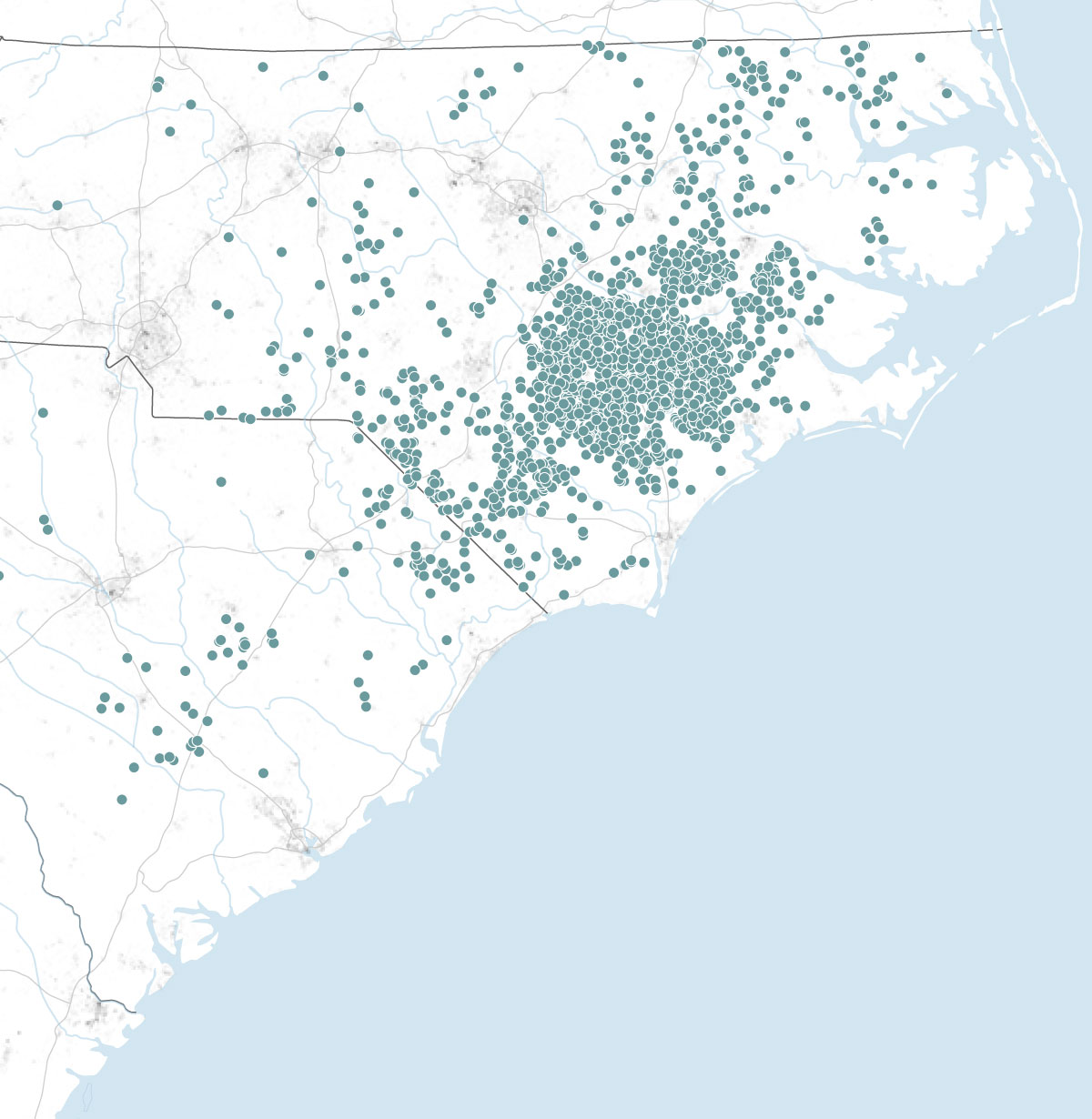 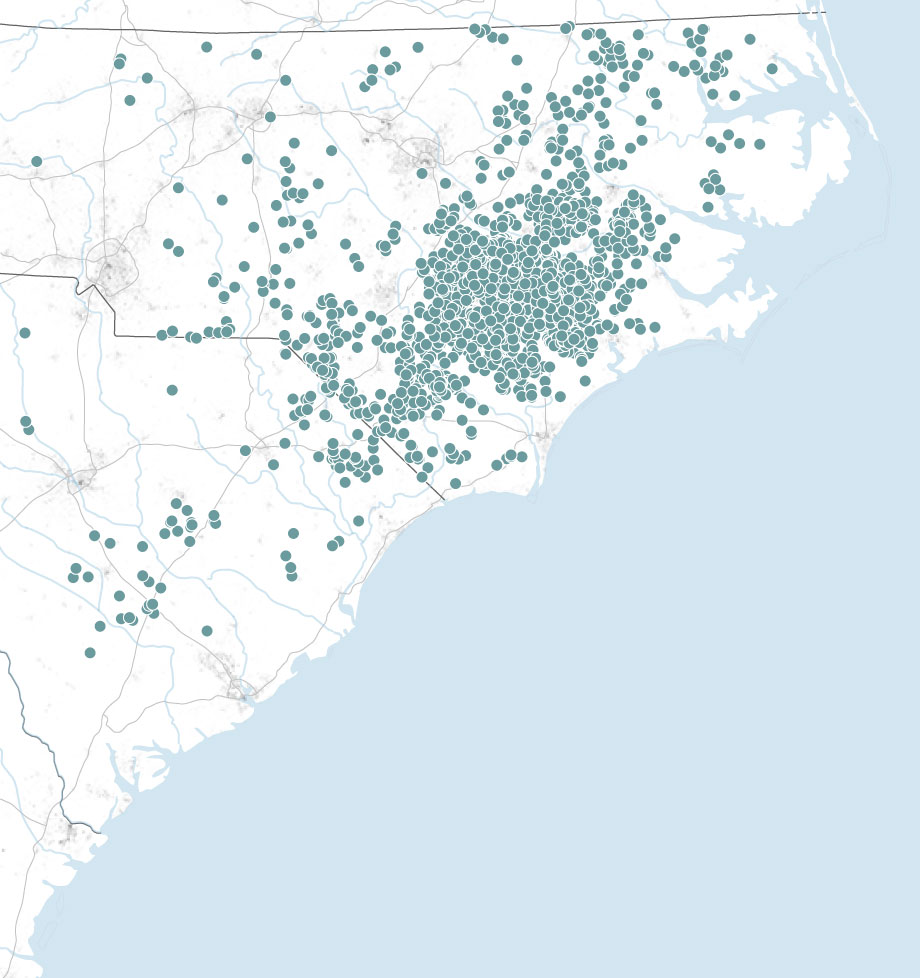 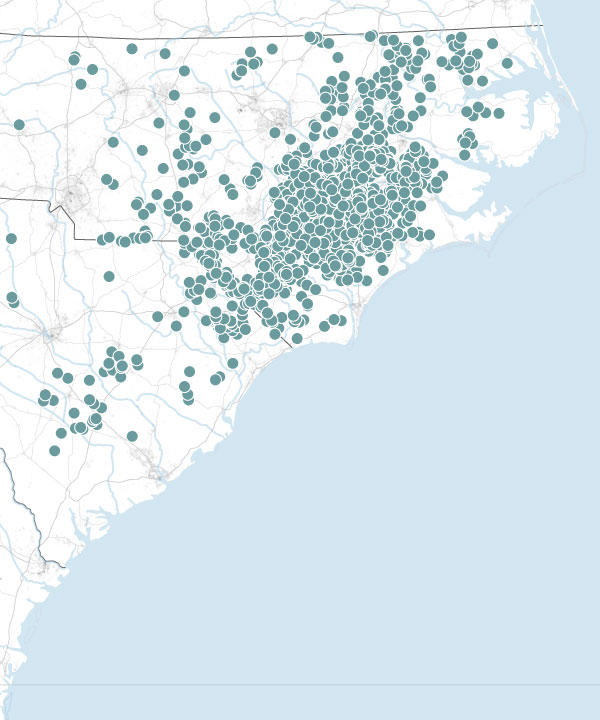 “This storm is hurtling towards the center of animal agriculture in the state of North Carolina,” said Will Hendrick, an attorney with the environmental nonprofit Waterkeeper Alliance.

Florence’s path includes the two counties, Duplin and Sampson, with the highest concentration of pork production in a state that produces a lot of pork. North Carolina has 9.7 million pigs, producing almost 10 billion gallons of manure annually. The only state with a bigger pork business is Iowa.

“It’s 500 times the waste produced by the entire population of Washington D.C.,” said Alexis Andiman, an associate attorney with EarthJustice, a nonprofit environmental law firm that has sued the state over its handling of animal waste.

The material is collected in open pits called lagoons. The system’s design is based on storm surge-data from the 1960s, before the effects of climate change were as well understood.

In 2016, Hurricane Matthew swamped 14 lagoons in the state. And in 1999, the liquid that escaped when Hurricane Floyd flooded dozens of lagoons wound up in waterways where it killed fish and caused algae blooms, which imperil aquatic life.

Andy Curliss, the chief executive of the North Carolina Pork Council, said that the industry had adjusted over the years. “A lot of the farms that flooded in Floyd were bought out and closed, and that’s why you didn't say the same impact in Matthew,” he said. 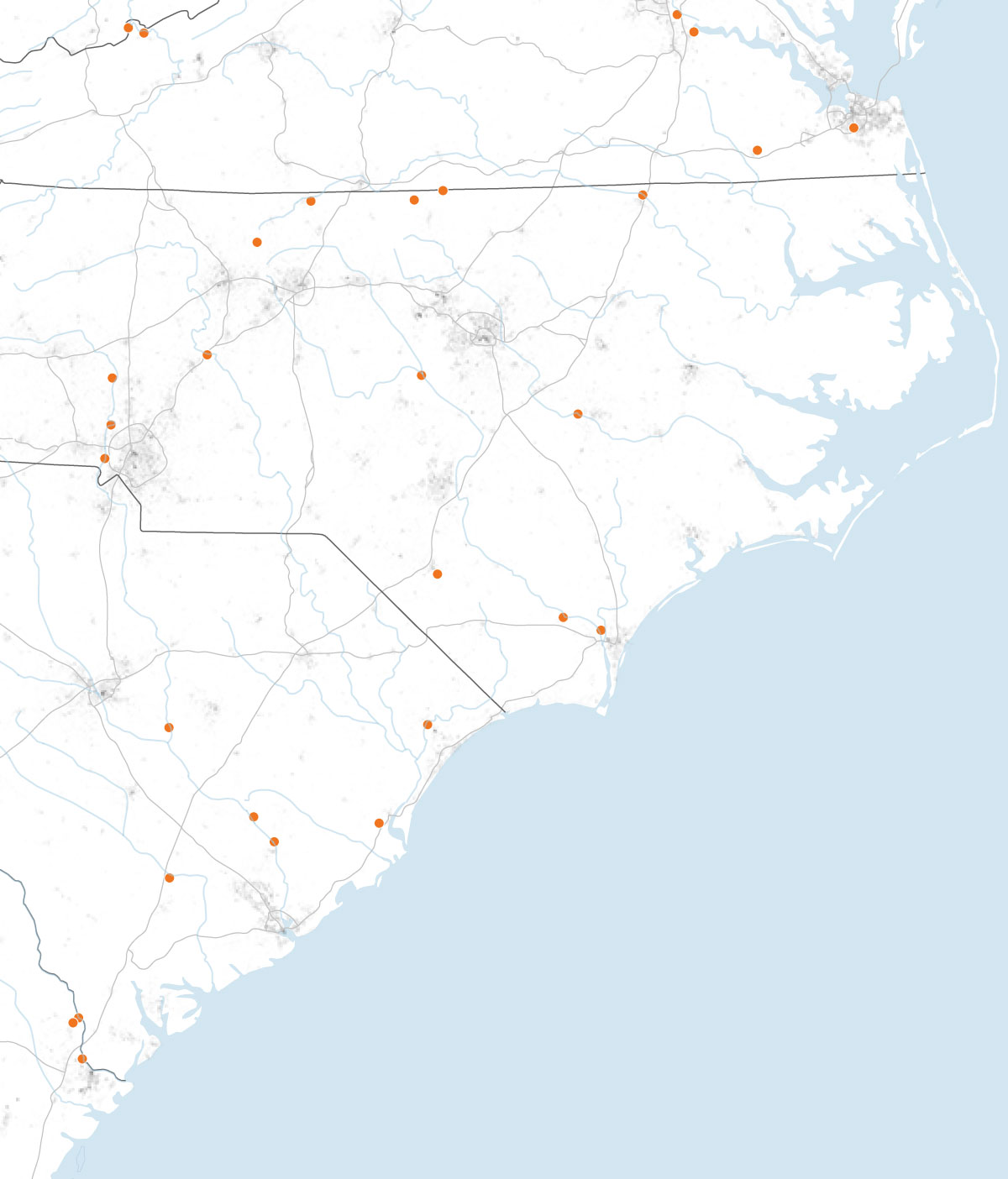 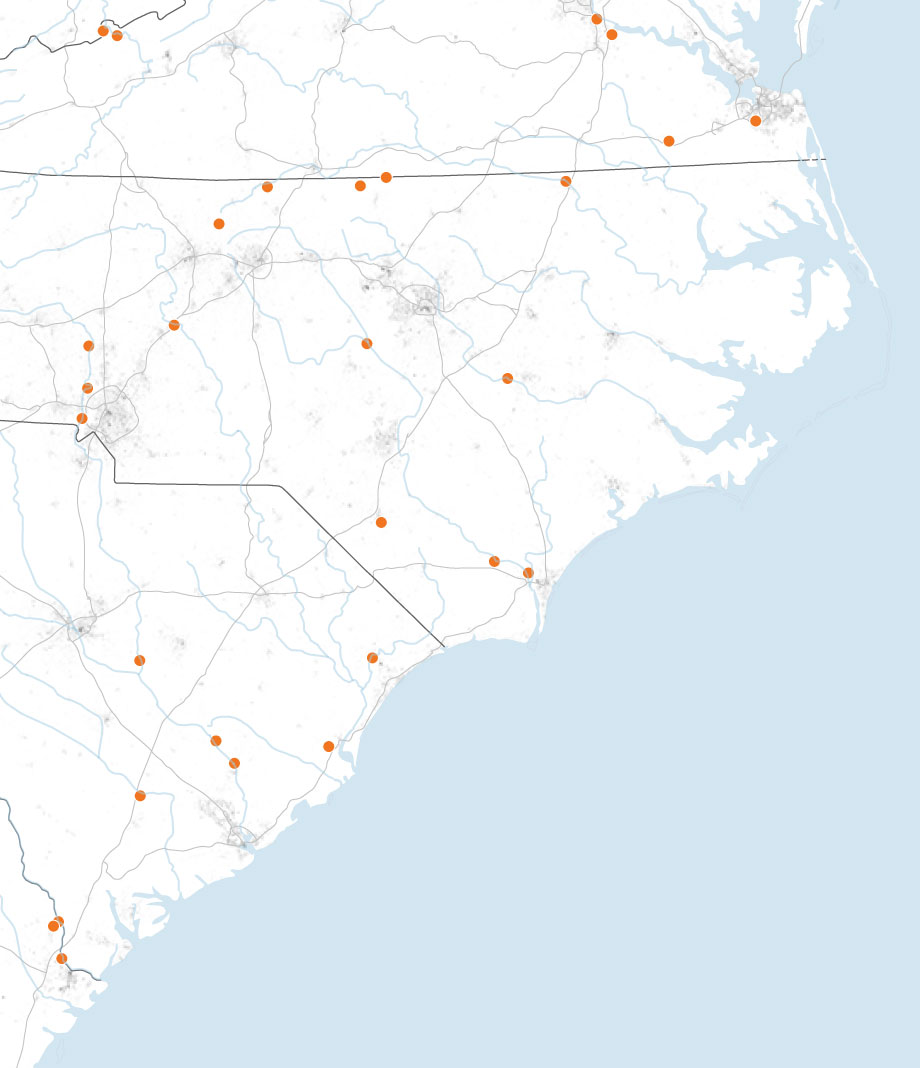 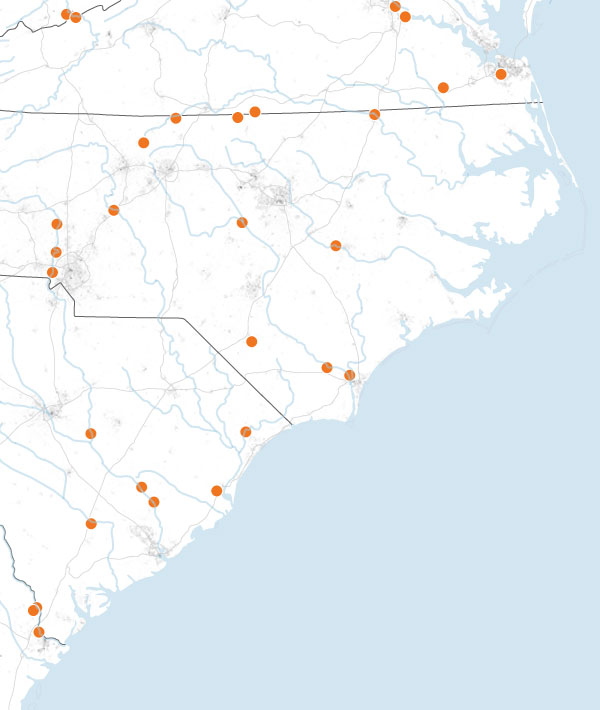 Coal ash is the dusty residue that remains after power plants burn coal to generate electricity. It contains heavy metals like arsenic, lead, mercury and selenium, which are linked to respiratory illnesses and cancer.

Energy companies maintain that the way they store coal ash, in earthen pits mixed with water, is safe. Still, there is concern that Hurricane Florence could displace it from the ponds.

There are two dangers, according to Avner Vengosh, a professor of Earth and Ocean Sciences at Duke University. “One is the overflowing of coal ash ponds causing water contamination in lakes and rivers,” he said. “The other potential risk is the escape of the ash itself.”

That happened In 2008 in Kingston, Tenn., when heavy rains led to the breach of a pond, releasing 1.1 billion gallons of coal ash. It is the largest such spill on record.

Duke Energy, North Carolina’s largest utility, said its measures would keep the coal ash in the ponds. At one site, a pond has been partly covered to help keep water out. Anne McGovern, a Duke Energy spokeswoman, said the company would also continuously monitor the situation. “We actually have drones available to us to help do those inspections,” she said. 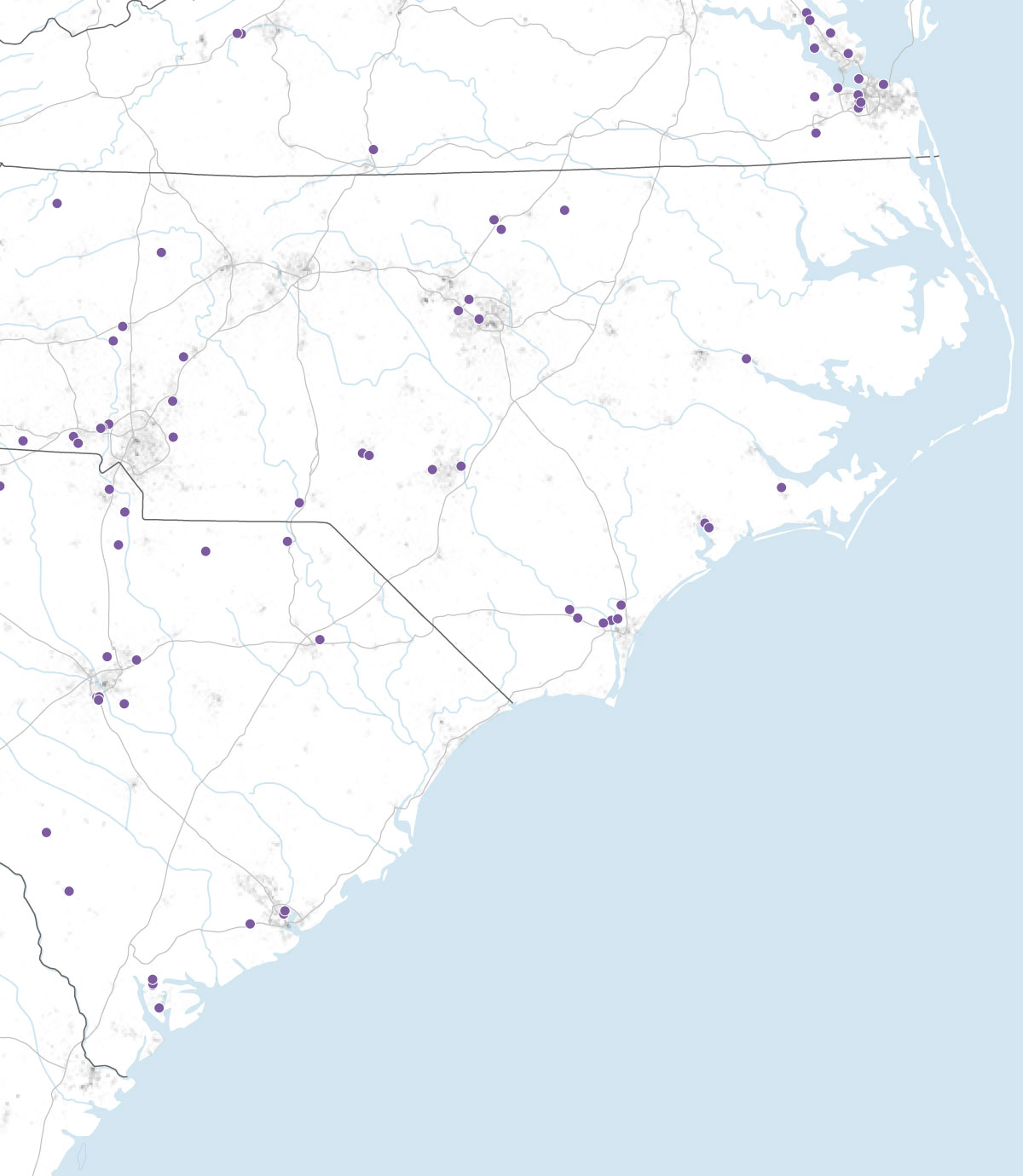 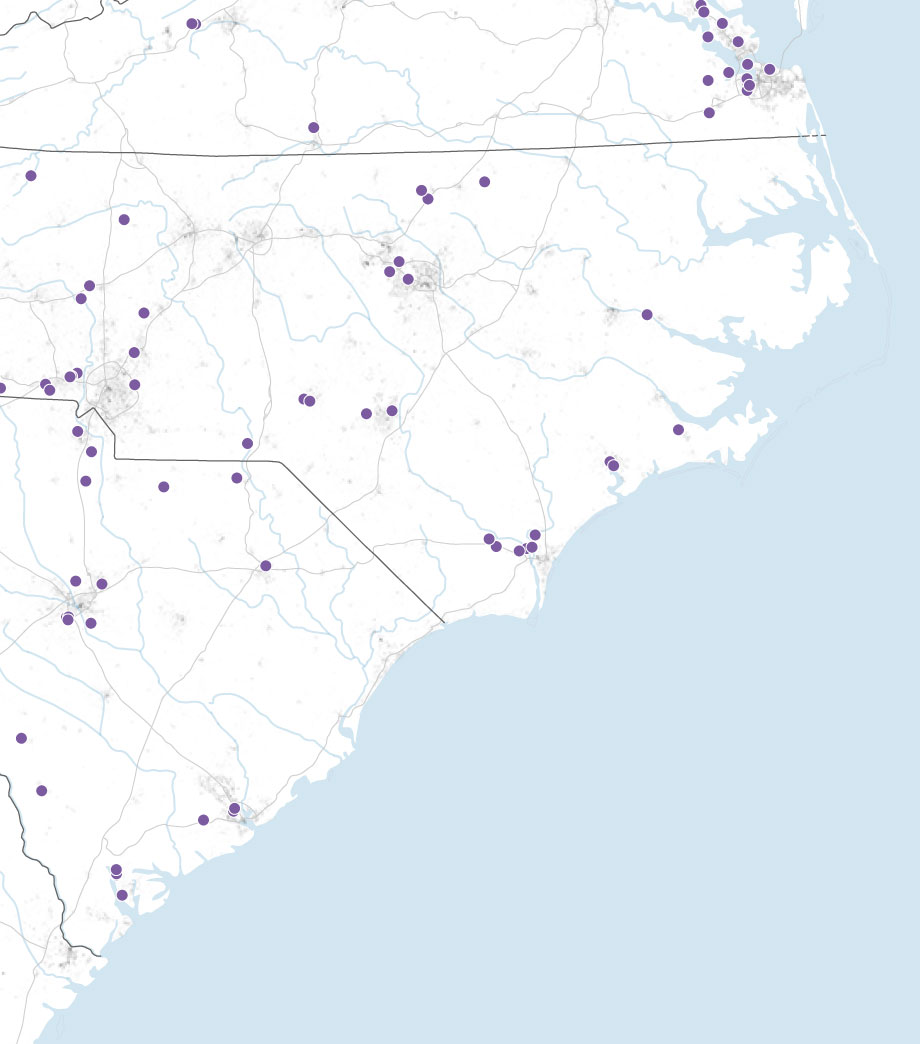 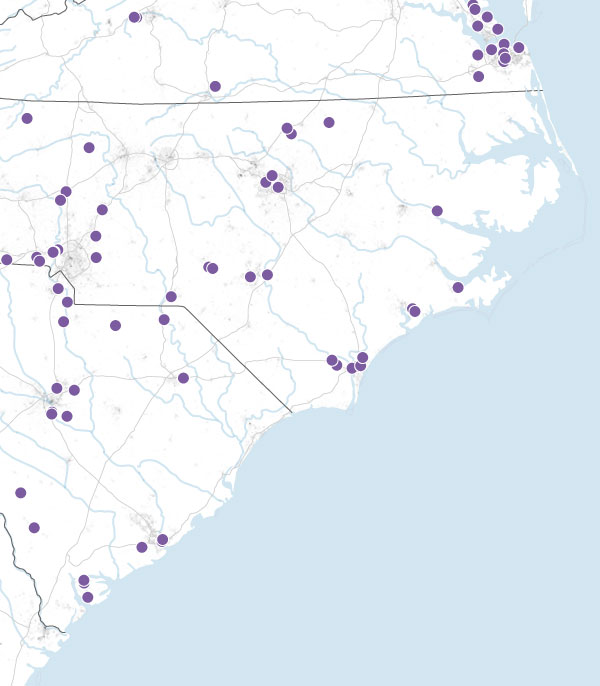 The Carolinas are home to more than 70 high-priority Superfund hazardous-waste sites, including a former smelting plant in North Charleston near the coast that is contaminated with arsenic, antimony and other substances linked to health problems including cancer.

The Environmental Protection Agency has said it is monitoring at least 11 Superfund sites in the two states. The agency came under fire last year after hurricanes Harvey and Maria inundated Superfund sites in Houston and Puerto Rico.

“Industrial sites have historically been near water,” said Prof. Thomas Burke, associate dean at the Johns Hopkins School of Public Health, who studied chemical exposures after Hurricane Katrina and other storms. “That makes them definitely vulnerable,” he said. “In New Orleans, they caused a toxic gumbo.”

Though cleanup is under way at the Carolina sites, and contaminants like arsenic and lead are already capped to keep them in place, flooding still poses a threat. “With extraordinary surges and inundation of water, you really have to worry about the integrity of these things,” Professor Burke said. 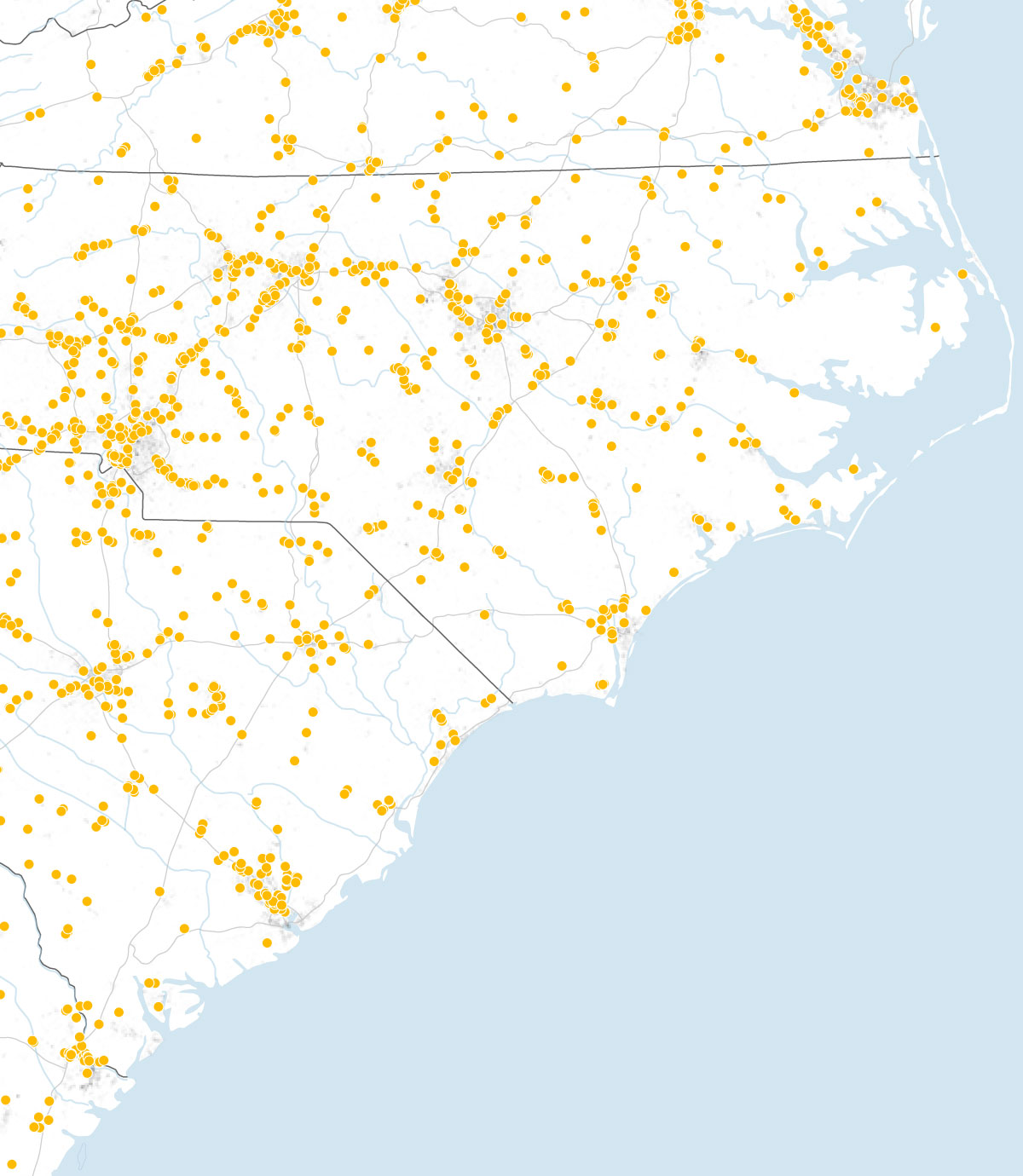 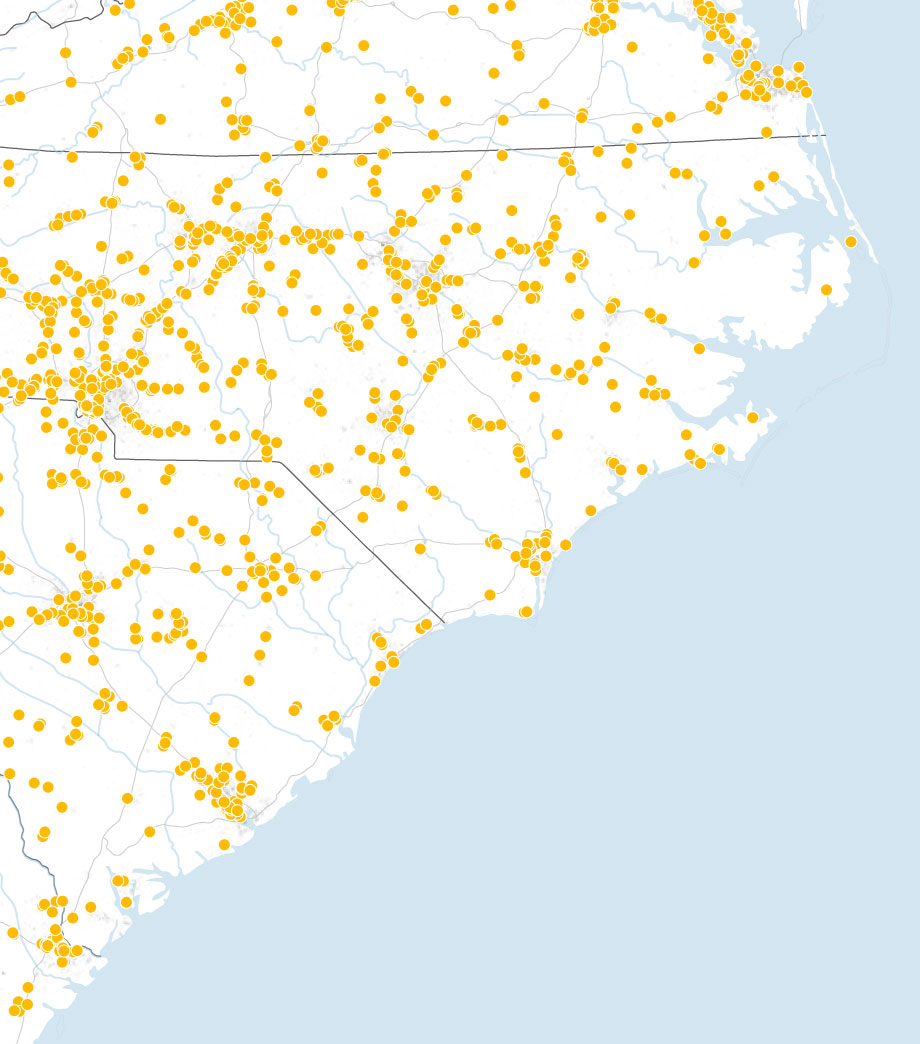 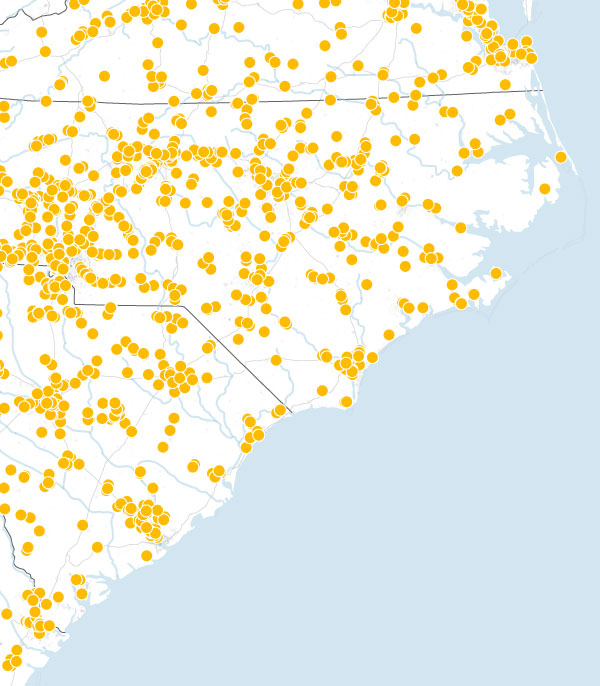 North and South Carolina are home to more than one thousand sites where toxic chemicals are used or stored, according to a database maintained by the E.P.A.

The region’s paper mills, for example, use various solvents to treat the lumber. Across the country, 2,500 chemical sites lie in flood-prone areas, a New York Times analysis found this year.

“With flooding, will there be damage to storage tanks? These are things we have to watch out for,” said Elena Craft, a senior health scientist at the Environmental Defense Fund. “We’re talking PCBs, dioxins, the worst of the worst,” she said, referring to chemicals known to be harmful to human health.

Professor Burke said flooding could turn common neighborhood businesses, like gasoline stations or dry cleaning shops, into public health threats. Sewage spills are another concern. “Even a run-of-the-mill warehouse that happens to have a huge inventory of pesticides — if that gets into the water, there’s exposure,” he said.