Scientists analysing end-of-summer snowline survey photos have estimated that 13 million cubic meters of ice have been lost from just one glacier from 2016 to 2019.

NIWA climate scientist Dr Andrew Lorrey says that the volume lost from the Brewster Glacier in Mt Aspiring National Park is about equal to the basic drinking water requirements for all New Zealanders for those three years. The amount was calculated by Dr Lauren Vargo, a researcher based at Victoria University Wellington who has pioneered photogrammetry techniques to track New Zealand ice volume changes through time.

However, the volume lost from Brewster Glacier is only a small part of the Southern Alps ice storage which has been in a decline since annual monitoring of the glaciers began in the late 1970s. Dr Lorrey, who coordinates the aerial survey each March, says about 30 per cent of the Southern Alps ice volume has been lost over the past four decades which is equivalent to 15.9 trillion litres of water - about equal to the basic daily water use requirements over that timespan for a population the size of New Zealand today. 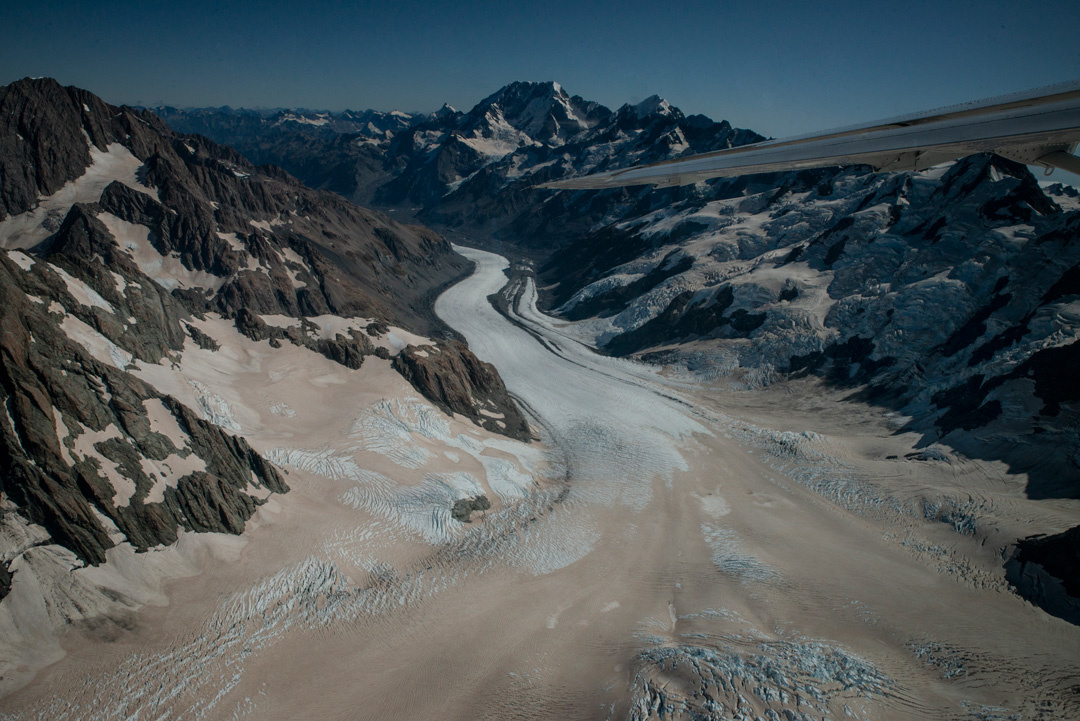 Glacier survey 2020 [Photo: Rebekah Parsons-King, NIWA] This year scientists from NIWA and the Victoria University Wellington recorded more snow on the South Island glaciers than the previous two years, but warned it could not be considered any kind of recovery. Dr Lorrey said this year’s snowline was part of standard climate variability, in which some good snow years are to be expected amongst the trend of increasing frequency for warmer temperatures.

Journalists are invited to attend a media conference in Queenstown on Friday, March 6, starting at 10.15am at which scientists from NIWA and Victoria University of Wellington will outline the initial findings of the annual end-of-summer snowline survey taking place on March 5.

But he said it would take between 20 to 30 years like this one to “even start to consider whether the recent damage can be reversed to any degree”.

That is because the previous two years had produced particularly harsh conditions, with marine heatwaves and record temperatures taking their toll on the glaciers and pushing snowlines off the top of many mountains.

In order to grow glaciers, the long-term permanent snowline must be below the mountain top so winter snow can be retained to form ice. However, Dr Lorrey said the damage sustained by some small glaciers between 2018 and 2019 has placed them on a path to extinction.

But, according to a report that DeLucia coauthored appearing in the journal Ecosphere today, if you’re a farmer trying to grow corn it means something very different: You need more water.

In addition, this year ash from the Australian bushfires blanketed the Southern Alps ice, which absorbs more solar radiation and increases the potential for more melting. Dr Lorrey says thousands of photos taken of key index glaciers during each annual survey are increasing in importance because they provide scientists with a better idea of this part of New Zealand’s water accountancy.

“Over the past few years, our observations of extreme and variable conditions highlight strong impacts on water – which is arguably our most precious natural resource.”

Dr Lorrey says the long-term glacier photo archive is a valuable scientific resource for future generations and also helps establish how the climate is changing in New Zealand.