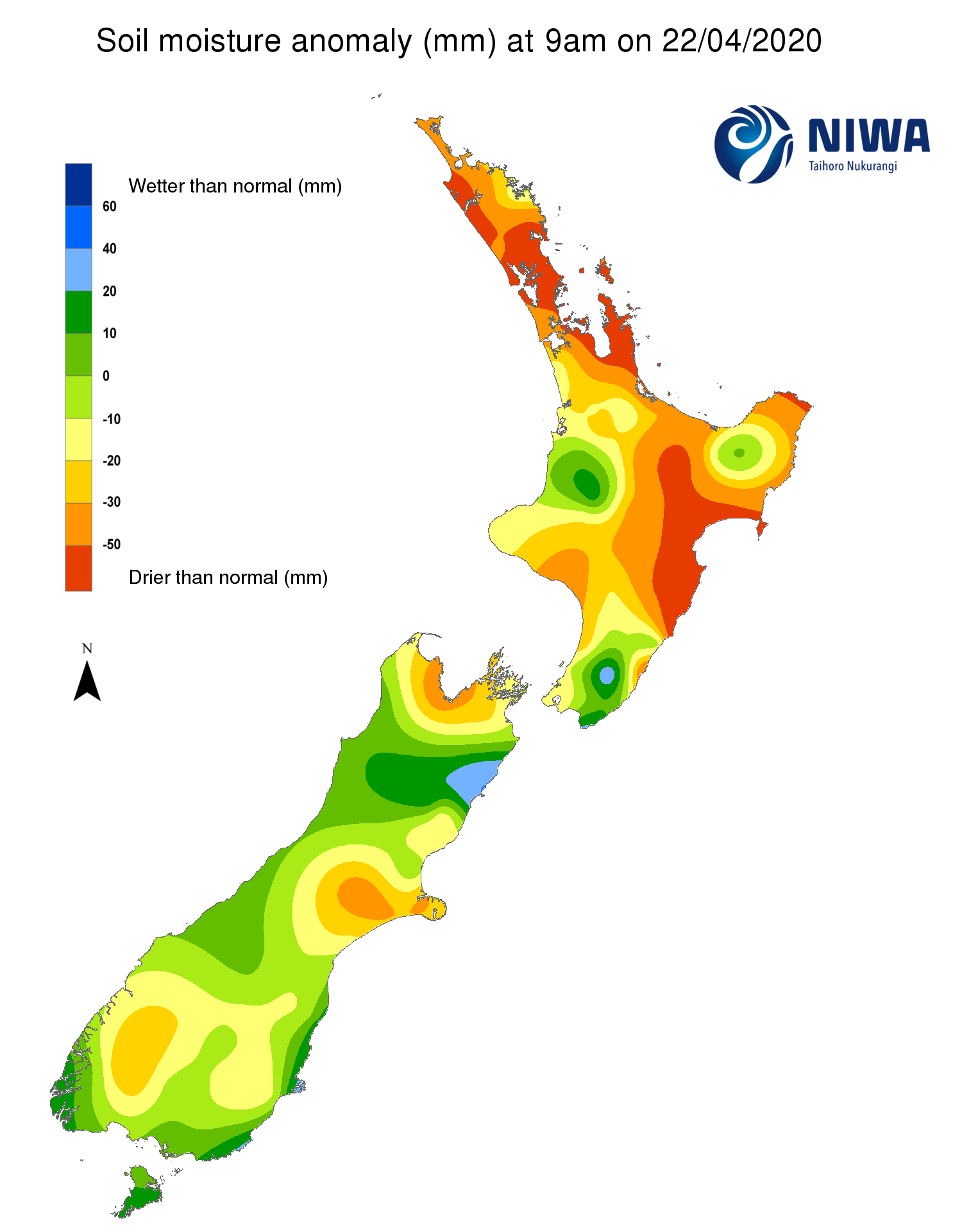 In the North Island, many locations received moderate to substantial rainfall amounts ranging between about 30-60 mm, including much of Northland, Waikato, Taranaki, Gisborne, and Hawke’s Bay. Meanwhile, amounts less than 30 mm were observed across eastern Northland, Auckland, Manawatu-Whanganui, and Wairarapa. This resulted in significant soil moisture increases in the western North Island, with smaller increases observed in parts of Northland, the Coromandel Peninsula, and Kapiti Coast. Meanwhile, additional soil moisture decreases occurred in coastal Bay of Plenty, northern Waikato, Gisborne, Hawke’s Bay, and Wairarapa. The driest soils across the North Island, when compared to normal for this time of the year, are found near Cape Reinga and coastal Wairarapa. Meanwhile, the wettest soils for this time of the year are located in Manawatu-Whanganui and western Waikato.

Despite drier than normal soils in some areas, no hotspots are currently found across the North Island. In the South Island, widespread heavy rainfall exceeding 75 mm was observed in the West Coast during the past week, with some locations receiving more than 150 mm. Amounts of 50 mm or more were also observed in northwestern Marlborough. However, the eastern half of the South Island generally saw much less rainfall, with most locations across Canterbury, Otago, and Southland receiving less than 25 mm. This generally led to small to moderate soil moisture increases in the West Coast and Tasman, while small decreases were observed from Canterbury to Southland. The driest soils in the South Island compared to normal for this time of the year are located in coastal southern Canterbury, while the wettest soils for this time of the year are found in southern Westland.

A hotspot is now in place in southern Canterbury, from approximately Timaru south to the Otago border.

In the North Island, high pressure will lead to a dry weekend nearly everywhere, with only a few showers reaching western areas on Sunday evening. Monday and Tuesday will have a better chance for showers to occur, with most focused on the western North Island and the Central Plateau. Mid-to-late next week may feature generally dry weather once again as high pressure sits nearby, although there is a possibility that a moisture-rich plume may approach the upper North Island in the Thursday-Friday (22-23 October) time frame. However, at this time there is substantial uncertainty in this part of the forecast. Total weekly rainfall may reach 15-30 mm in the western North Island and Central Plateau, while amounts may be less than 15 mm elsewhere.

In the western and central North Island, soil moisture levels are likely to stay fairly constant during the next week. However, soil moisture decreases are likely in most other areas, especially in the east coast and potentially the Far North as well (especially if the aforementioned moisture plume does not eventuate). This may result in the formation of hotspots in coastal Wairarapa and Cape Reinga. In the South Island, a front will deliver substantial rainfall to the lower West Coast through Saturday morning, but only light amounts will be found east of the Alps. On Monday (19 October), another front may bring moderate rainfall to the upper West Coast and Tasman, but once again only light rainfall will reach the eastern South Island. Beginning on Tuesday, high pressure may deliver several days of dry weather to the South Island. Weekly rainfall of 50-80 mm is likely along the West Coast, but much more meagre rainfall of 15 mm or less is likely across the eastern half of the island. As of 13 October, the New Zealand Drought Index (NZDI) map below shows that drier than normal soils are located in southern Canterbury and northern Otago, but meteorological drought is not currently found in New Zealand. Please note: some hotspots in the text above may not correspond with the NZDI map. This difference exists because the NZDI uses additional dryness indices, including one which integrates the rainfall deficit over the past 60 days. Changes are therefore slower to appear in the NZDI compared to soil moisture anomaly maps that are instantaneously updated.