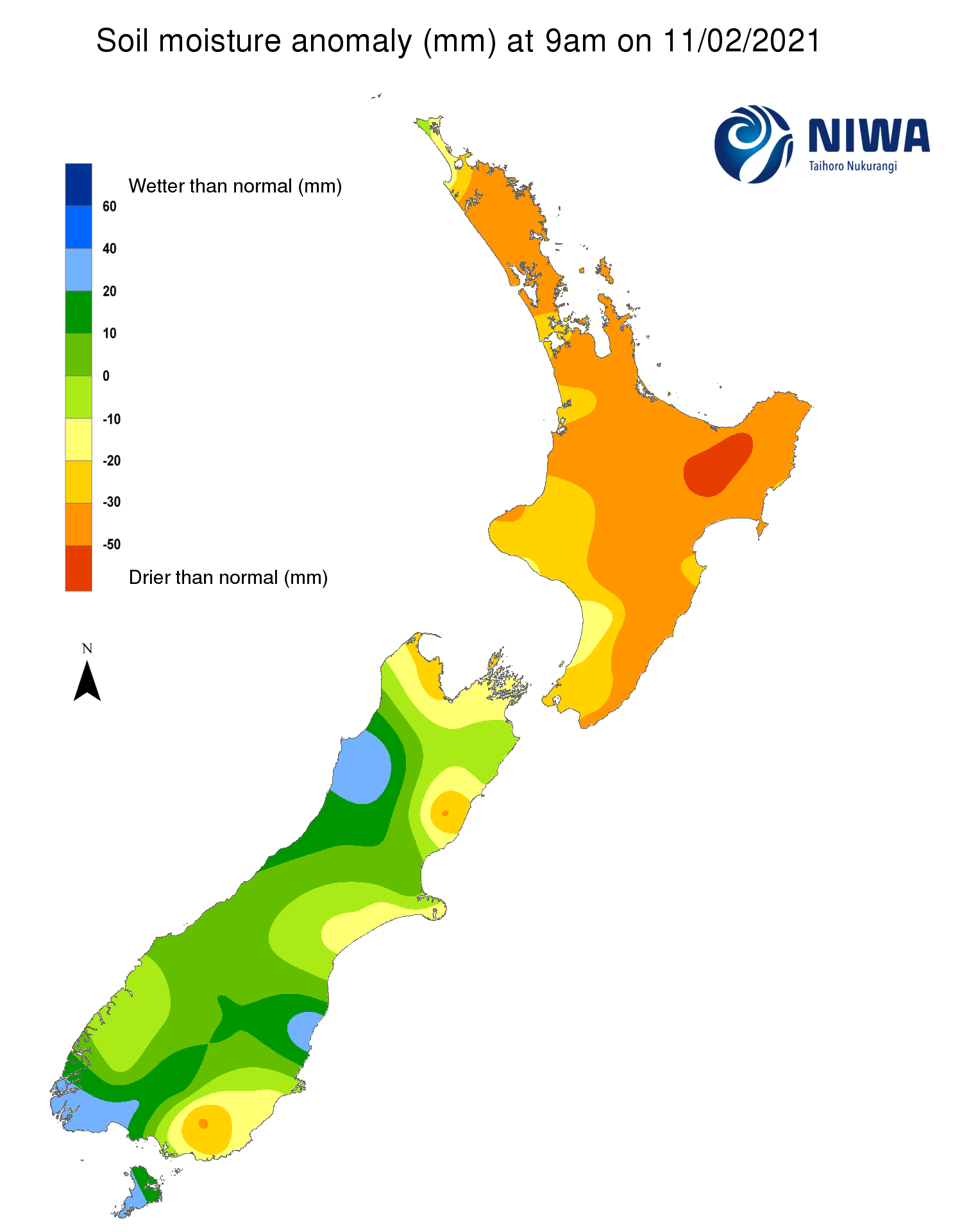 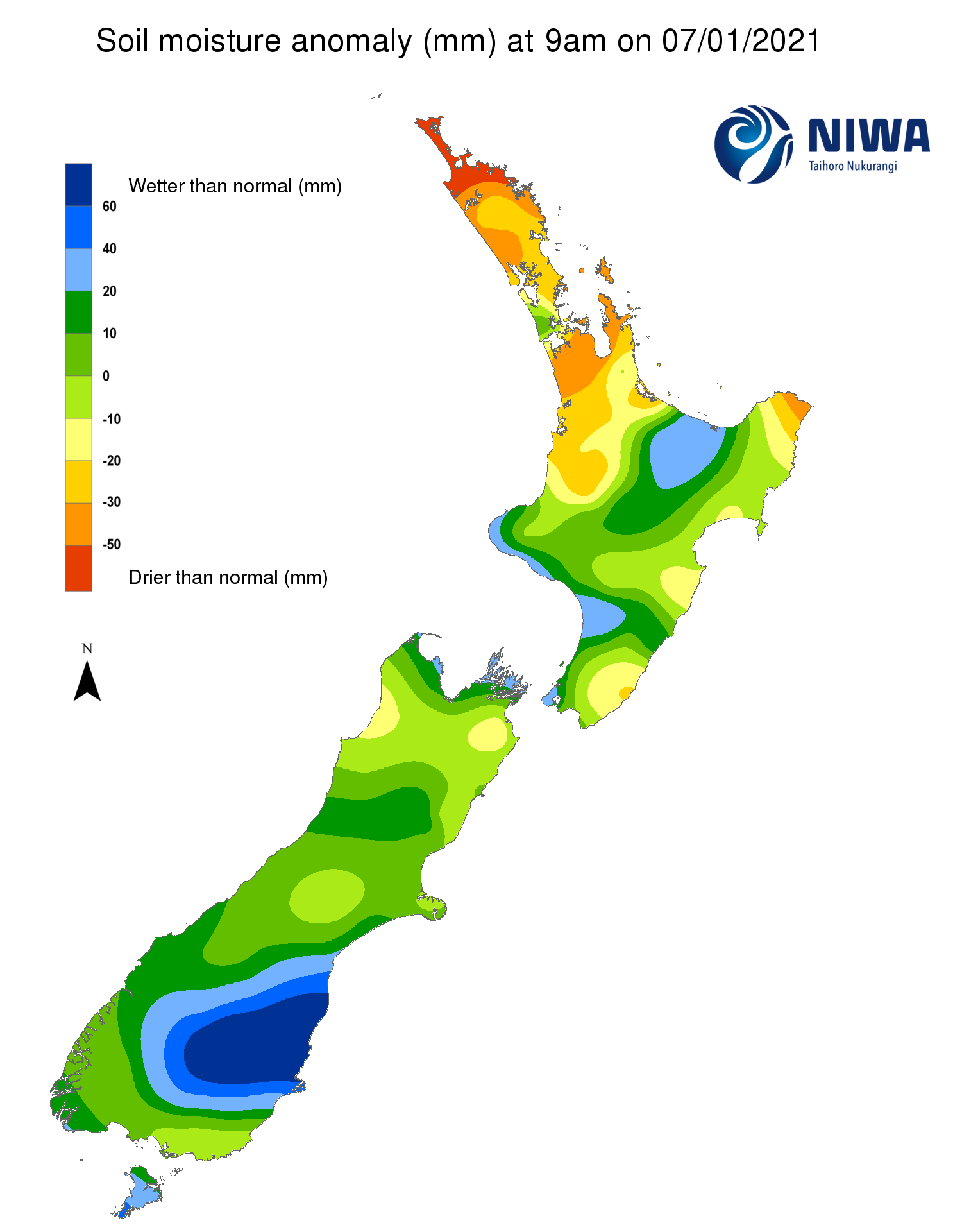 High pressure was commonplace over the North Island during the past week, meaning that rainfall was minimal. In fact, most locations received less than 5 mm of rainfall, with some places receiving none at all. The only exceptions were western Waikato and near Wellington City, where small pockets of 15-25 mm were observed. This resulted in widespread moderate-to-large soil moisture decreases throughout the North Island in the past week. The driest soils across the North Island, when compared to normal for this time of the year, are found in southern Waikato, while the wettest soils for this time of the year for the North Island are found in the Far North.

However, most locations in the upper and central North Island will likely see either little change or small decreases in soil moisture levels during the next week.

Hotspot conditions remain widespread across the North Island, including southern Northland, southern Auckland, much of Waikato, eastern Bay of Plenty, East Cape, Hawke’s Bay south to Wairarapa, much of Manawatū-Whanganui, and Kapiti Coast. The New Zealand Drought Index (NZDI) map below shows that meteorological drought is in place in a portion of East Cape, while widespread dry-to-extremely dry soils are in place across most of the rest of the North Island. In the South Island, pockets of moderate rainfall (generally up to 75 mm) were observed in the lower West Coast, Fiordland, and western Tasman. 25 mm or more was also observed in the Nelson area. However, rainfall amounts were meagre in the eastern South Island, with most locations receiving less than 5 mm, and some receiving none at all. This resulted in small-to-moderate soil moisture decreases for most locations, although soil moisture increases were observed in Fiordland. The driest soils in the South Island compared to normal for this time of year are located in western Tasman, eastern Southland, and Clutha District, while the wettest soils for this time of the year for the South Island are found in Fiordland.

Hotspots are currently in place in Nelson and nearby parts of Tasman and Marlborough, coastal Hurunui, Banks Peninsula, Selwyn District, and Clutha District. The New Zealand Drought Index (NZDI) map below shows that dry to very dry soils are widespread in the northeastern South Island.

Through Monday (1 March), generally tranquil weather is expected across the North Island. However, these days may feature isolated showers that produce light rainfall in localised areas. An arriving front will bring more numerous showers and perhaps thunderstorms to the western and central North Island on Tuesday. By late next week, a moisture-rich front may reach the upper North Island, bringing the chance for locally heavy rainfall. Weekly rainfall totals could reach 20-40 mm in the upper and western North Island, while the east coast is likely to see amounts of 20 mm or less.

Once again, significant rainfall occurred in the western North Island during the past week, with widespread amounts of greater than 50 mm from southern Waikato to Kapiti Coast.

As of 23 February, the New Zealand Drought Index (NZDI) map below shows that meteorological drought is in place in a portion of East Cape. Widespread dry-to-extremely dry soils are in place across most of the North Island and the northeastern South Island. Please note: some hotspots in the text above may not correspond with the NZDI map. This difference exists because the NZDI uses additional dryness indices, including one which integrates the rainfall deficit over the past 60 days. Changes are therefore slower to appear in the NZDI compared to soil moisture anomaly maps that are instantaneously updated.