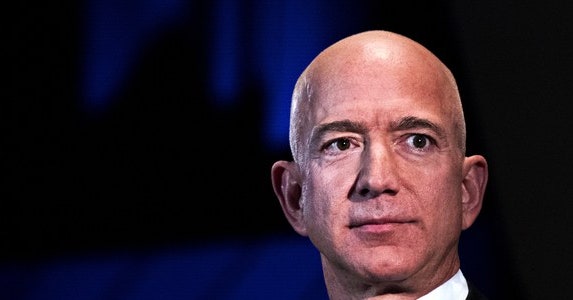 When award-winning novelist MacKenzie Bezos and her husband Jeff Bezos, the chief executive and founder of Amazon, announced on Twitter Wednesday they were getting divorced, public discussion over the uncoupling quickly centered on the impact it might have on Jeff’s company, and on each sides’ net worth. Were he and his wife to split their estimated $136 billion fortune equally, news articles speculated that MacKenzie could become the “richest woman in the world,” far wealthier than even people like Elon Musk.

TMZ reports that the couple did not have a prenup. Washington, where they live, is a community property state, meaning that all property and debts acquired during the 25-year marriage could be equally split if the Bezoses can’t negotiate an agreement. Amazon, for the record, is 24 years old. But thinking about the divorce as an opportunity for MacKenzie to become the richest woman in the world is a strange way of describing her situation, as Bloomberg points out. She is already the richest woman in the world, because she’s half of the richest couple on Earth.

This week has been full of stories with headlines like “ How much could MacKenzie Bezos get in a divorce? ” speculating on what will happen to “his wealth.” (Punctuated by the occasional outcry that any human being could stand to receive more than $60 billion at all.) What was often missing, or glossed over, is the fact that MacKenzie helped her husband start his historic company, starting by agreeing to leave their life and move across the country from New York City to Seattle, where Amazon was founded. It’s also part of a wider pattern of how the stories of tech companies get told, which erases the many individuals who help to build them in favor of highlighting the “lone genius” at the helm. Many of the people who fade to the background have been women .

“Both historically and today, it takes a lot more ‘proof’ for a woman to claim competence, importance, and intelligence—something we see powerfully played out on the national political stage every day, from Hillary Clinton to Alexandria Ocasio Cortez,” says Marie Hicks, a technology historian and the author of Programmed Inequality: How Britain Discarded Women Technologists and Lost Its Edge In Computing. “It seeps into how we talk about women associated with tech on an everyday basis, whether it's at work, at school, online, or in the media.”

Empires like Amazon and Apple are not created by a single man in a vacuum; they are the product of a mix of luck and contributions from an entire team—including from a founder’s spouse.

MacKenzie met Jeff after she graduated from Princeton in 1992 and took a job at the relatively new hedge fund D. E. Shaw, where Bezos already worked. In 1993 they married, and by 1994 they were driving to Washington, with MacKenzie reportedly at the wheel of the car. The couple was leaving behind a wealthy existence on Manhattan’s Upper West Side, according to Brad Stone, the author of the 2013 book The Everything Store: Jeff Bezos and the Age of Amazon . “They gave up a really comfortable lifestyle and successful careers to move across the country and start something on the internet,” says Stone. “The only reason [Jeff] was able to do that is because he had an extremely supportive spouse. It was an incredible risk and one that they both took on jointly.”

In a 2010 commencement speech he gave at Princeton, Jeff himself acknowledged the gamble his wife had taken. “I told my wife MacKenzie that I wanted to quit my job and go do this crazy thing that probably wouldn’t work since most startups don’t, and I wasn’t sure what would happen after that,” he said. “MacKenzie … told me I should go for it.” (Amazon did not immediately respond to a request for comment.)

In Bellevue, the Seattle suburb where Jeff rented a garage to be the site of Amazon’s first headquarters, MacKenzie helped get the company off the ground. While researching his book, Stone interviewed early employees who he says recalled how MacKenzie wrote checks and assisted in keeping track of the books. A WIRED profile of Jeff from 1999 noted that she helped negotiate the retail giant’s first freight contracts. As the company grew bigger and hired more staff, MacKenzie played less of a role in Amazon’s day-to-day operations, though she continued to support Jeff at company events. She wrote two novels, The Testing of Luther Albright , which won the American Book Award in 2006, and Traps, which was published in 2013.

Aside from a profile in Vogue published almost five years ago, MacKenzie, as well the four Bezos children, has maintained a low public profile. One noteworthy exception took place in 2013, after Stone’s book came out. MacKenzie personally left a one-star review on its Amazon page, disputing the book’s accuracy. She also emphasized her own role at the company: “I worked for Jeff at D. E. Shaw, I was there when he wrote the business plan, and I worked with him and many others represented in the converted garage, the basement warehouse closet, the barbecue-scented offices, the Christmas-rush distribution centers, and the door-desk filled conference rooms in the early years of Amazon’s history. Jeff and I have been married for 20 years.”

MacKenzie and other early Amazon employees, of course, aren’t the only contributors to the company’s—and Jeff’s—success. Amazon has benefited from other factors, like years of successfully avoiding collecting state sales taxes, undercutting competitors’ prices. The company also relied on external innovations like the the internet, developed in part by government researchers . This of course is hardly unique to Amazon. Elon Musk and his company Tesla might not be much without the billions of dollars they have received in government grants. Steve Jobs’ iPhone was made possible by researchers who spent decades developing touchscreen technology, beginning in the 1940s.

Admittedly, MacKenzie’s role in the history of Amazon may not be as crucial as the existence of the World Wide Web. Then again, it’s hard to say for sure. Would e-commerce look any different today if she had refused to move out to Seattle and be part of an internet startup? Countless decisions contribute to the success or failure of a company, some big, some small—and almost never by just one person. It’s not always obvious which choices tip the scale one way or the other. The lone genius myth has been largely debunked, but it can be all too easy to fall back into the familiar rhythms of Silicon Valley’s favorite narrative devices. Even, or maybe especially, when gossiping about the juicy details of a high-profile divorce. Plenty of people facilitate the creation of corporations like Amazon and the immense wealth that they generate, from inventors to employees to policymakers to taxpayers to spouses. Maybe it’s time to talk more about what all those contributions are actually worth.

But in at least one respect, Amazon’s Hunger Games-style civic competition backfired: It’s shined a spotlight on how Amazon and companies like it have benefitted enormously from taxpayer funds.Each year, local politicians spend up to an estimated $90 billion to lure corporations like Amazon to their states, which The Atlantic points out is “more than the federal government spends on housing, education, or infrastructure.” Most companies broker these deals in private.“Companies are already very good at negotiating incentives, often using offers from other cities to up their deals.