The climate is changing – and so are our seas. Warming sea temperatures have resulted in British cod moving north, benefiting Iceland. The English Channel has warmed during the last half century and the grey Atlantic triggerfish is now a year-round, rather than just a summer, resident in the waters off Cornwall and Dorset. Along the south coast of England there has also been an eastward shift in the distribution of “warm” Atlantic barnacles, which are now displacing the “cold” North Sea species.

But bigger fish, including sharks, are changing their range, too. An excellent recent paper revealed how temperature changes the occurrence and activity of roaming apex predators. It said that the redistribution of species is one of the most pervasive impacts of anthropogenic climate warming.

This detailed study of Australian tiger sharks suggested that an increase in water temperature of 1-2°C will lead to them being seen off New South Wales all year round (at the moment, they tend only to visit the region in summer). And as this species is responsible for a large proportion of the shark bites on humans this raises the issue of whether control measures, such as shark nets, should be deployed to protect Australian bathers.

Some sharks will follow the warmer water and their prey into UK waters, too. I have examined the known ranges of sharks and if water temperatures rise the following large species found off the coasts of Spain and Portugal may join the 40 species that are already in UK waters: great hammerhead, blacktip shark, sand tiger, bigeye thresher, longfin mako, bronze whaler, oceanic whitetip shark, silky shark, dusky shark, and goblin shark.

Indeed, one of these species has already visited British waters. The first bigeye thresher was caught off the UK near Newlyn, Cornwall in 1995. But while the potential number of shark species around the UK may increase in the next few decades, the overall number of sharks (especially the larger ones) will fall thanks to global overfishing. In fact, one report estimated that 100m sharks are killed each year, many for shark fin soup. 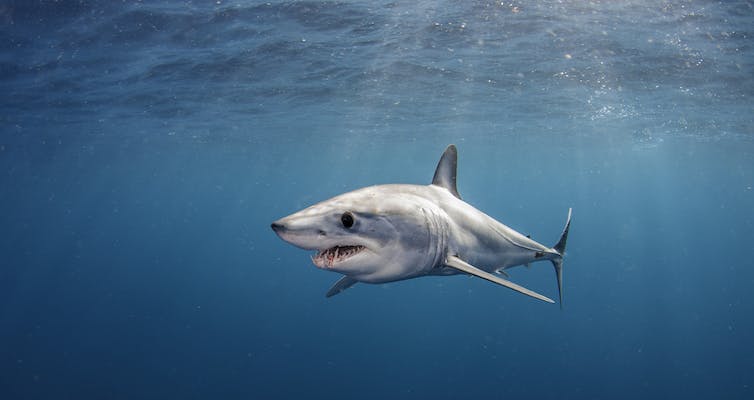 Most of the larger sharks are recorded on the IUCN Red List – which monitors endangered species – as “vulnerable” to or “near threatened” with extinction. Basically, we are killing sharks faster than they can reproduce. A typical female shark reaches maturity at ten-years-old and will produce less than ten young. Contrast this with a cod, which can reach maturity at a year old and produce over a million eggs each year.

As well as overfishing, sharks are also vulnerable to pollution. Most people are aware of the problems of waste plastics in the ocean. As the plastics break down into smaller and smaller particles, their ability to absorb pollutants increases and their incorporation into the ocean food chain becomes more likely. Sharks as top predators will take on the pollutants from everything that they have eaten, putting their health in peril. 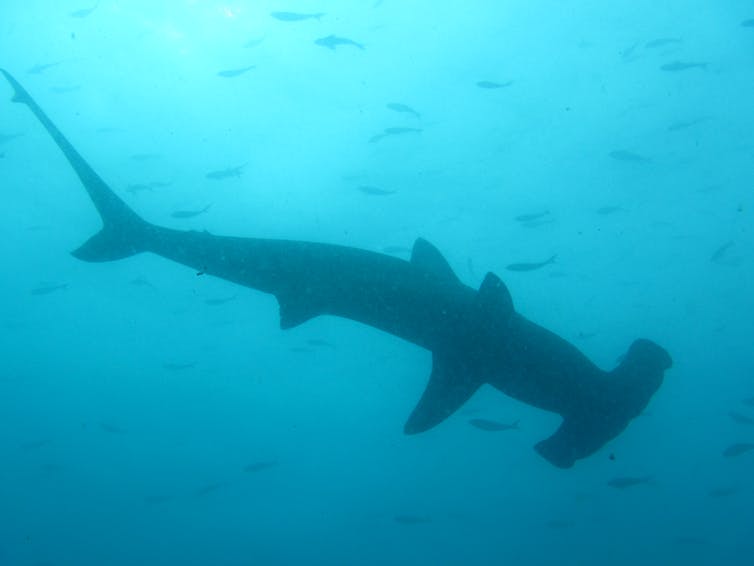 What about great whites?

Of course, if more large shark species are likely to come to British waters, many will wonder whether great whites will be among them. There is considerable debate over whether they have already visited – and I see no reason why not. They can live in large numbers in colder waters than the UK off South Africa and there’s a plentiful supply of one of their favourite foods – seals – along the Cornish coast, as well as around Scotland and other parts of the country. The only argument against there being great whites in British waters is that their numbers worldwide are declining (they are now protected in several countries) so the chances of seeing one in this region fall every year.

In March 2015, the conservation research organisation OCEARCH tagged a 14ft (4.4 metre) great white shark off Jacksonville, Florida and nicknamed her Lydia. She swam over 30,000km, including meanderings along the east coast of the US – before striking out for Europe. A year later, when she crossed the mid-Atlantic Ridge and came within a few hundred miles of Ireland, the media became very excited. The Mirror announced

Great White shark ‘just days away from Cornwall’ after scientists track it swimming across Atlantic.

Sadly, satellite contact was lost soon after that so we don’t know whether she made it. But this, and my recent suggestion that there may soon be more shark species around the UK, attracted a flurry of media attention – much of it overblown. While I was careful not to predict an influx of great white sharks, the type of headline used by The Daily Mail was almost inevitable:

Thankfully, a more measured response was made subsequently by The Guardian: “Warmer seas will not lure great white sharks to UK, experts say.” 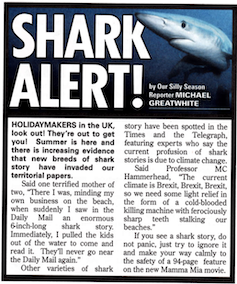 There seems to be an almost inevitable need to use the cliche “killer sharks” in press stories about sharks. But the number of human fatalities resulting from shark attacks is tiny compared to other causes – even vending machines are deadlier.

Britain’s largest shark is the basking shark, which can grow up to eight metres in length but eats nothing bigger than plankton. Nevertheless, it is a summer, silly season necessity to print a photo of a basking shark fin and claim it’s a “killer” great white. Perhaps the best overview of the popular press view of sharks is expressed by Private Eye.

While we continue to demonise sharks as mindless killers their wholesale slaughter goes unchallenged, until one day soon they will become extinct and shark natural history films will be reclassified as just history. So when we hear that more new species may start visiting the UK, it should trigger efforts to protect them, not just another wave of hysteria.