Globally, one-third of food produced for human consumption is wasted. Food waste costs Australia A$20 billion each year and is damaging our planet’s resources by contributing to climate change and inefficient land, fertiliser and freshwater use.

And it’s estimated if no further action is taken to slow rising obesity rates, it will cost Australia A$87.7 billion over the next ten years. Preventable chronic diseases are Australia’s leading cause of ill health, and conditions such as coronary heart disease, stroke, high blood pressure, some forms of cancer and type 2 diabetes are linked to obesity and unhealthy diets.

But we can tackle these two major issues of obesity and food waste together.

Described as metabolic food waste, the consumption of food in excess of nutritional requirements uses valuable food system resources and manifests as overweight and obesity.

The first of the Australian dietary guidelines is:

To achieve and maintain a healthy weight, be physically active and choose amounts of nutritious food and drinks to meet your energy needs.

In 2013, researchers defined three principles for a healthy and sustainable diet. The first was:

Any food that is consumed above a person’s energy requirement represents an avoidable environmental burden in the form of greenhouse gas emissions, use of natural resources and pressure on biodiversity.

Ultra-processed foods are not only promoting obesity, they pose a great threat to our environment. The damage to our planet not only lies in the manufacture and distribution of these foods but also in their disposal. Food packaging (bottles, containers, wrappers) accounts for almost two-thirds of total packaging waste by volume.

Ultra-processed foods are high in calories, refined sugar, saturated fat and salt, and they’re dominating Australia’s food supply. These products are formulated and marketed to promote over-consumption, contributing to our obesity epidemic. 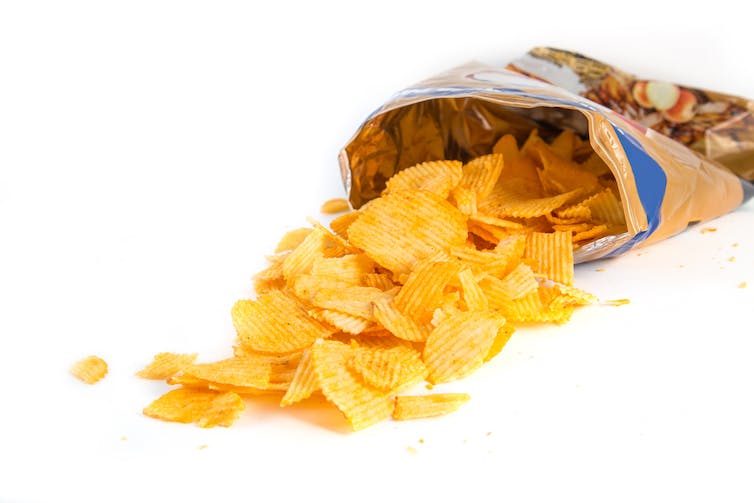 Healthy and sustainable dietary recommendations promote the consumption of fewer processed foods, which are energy-dense, highly processed and packaged. This ultimately reduces both the risk of dietary imbalances and the unnecessary use of environmental resources.

Author Michael Pollan put it best when he said, “Don’t eat anything your great-grandmother wouldn’t recognise as food.”

So what do we need to do?

In response to the financial and environmental burden of food waste, the federal government’s National Food Waste Strategy aims to halve food waste in Australia by 2030. A$133 million has been allocated over the next decade to a research centre which can assist the environment, public health and economic sectors to work together to address both food waste and obesity.

Other countries, including Brazil and the United Kingdom acknowledge the link between health and environmental sustainability prominently in their dietary guidelines.

One of Brazil’s five guiding principles states that dietary recommendations must take into account the impact of the means of production and distribution on social justice and the environment. The Qatar national dietary guidelines explicitly state “reduce leftovers and waste”.

Many would be surprised to learn Australia’s dietary guidelines include tips to minimise food waste:

Portion and serving sizes should be considered by commercial food settings. Every year Australians eat 2.5 billion meals out and waste 2.2 million tonnes of food via the commercial and industrial sectors. Evidence shows reducing portion sizes in food service settings leads to a reduction in both plate waste and over-consumption.

Given the cost of food waste and obesity to the economy, and the impact on the health of our people and our planet, reducing food waste can address two major problems facing humanity today.