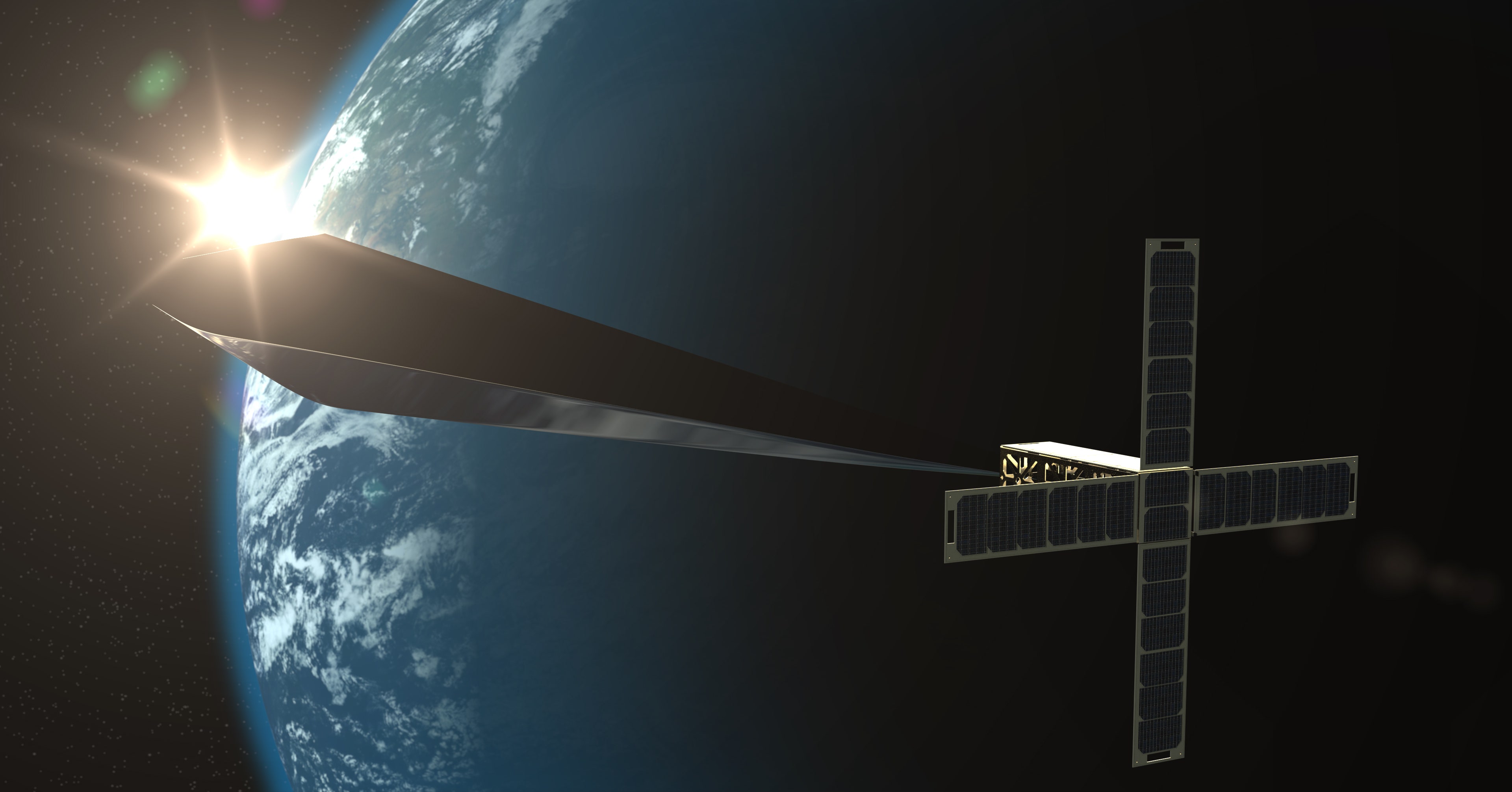 Internet access is so ubiquitous in the United States and Western Europe that it has spawned an entire cottage industry to help people disconnect . Yet for roughly half the world’s population this level of connectivity is simply unfathomable. Nearly 4 billion people haven’t been online once in the past three months—the UN’s comically low threshold for counting someone as an internet user—which means they miss out on the many social, economic, and educational benefits that come with an internet connection.

Entrepreneurs in Silicon Valley quickly realized that connecting the world presented a huge business opportunity, one that could be wrapped in feel-good humanitarian language to boot. The underwhelming result? Internet balloons and internet drones . There was another idea, though, that was equally bold and perhaps more realistic: internet satellites. Thousands upon thousands of internet satellites.

On Wednesday evening, SpaceX is expected to launch 60 internet satellites into low Earth orbit. They will be the first members of its satellite megaconstellation, Starlink. The 500-pound “flat panel” satellites will be boosted to nearly 275 miles above the Earth by a Falcon 9 rocket, at which point they will use their onboard ion thrusters to reach a final orbital altitude of about 340 miles above the Earth.

These satellites are still considered “production design” by SpaceX. They won’t include many planned features, including the laser crosslinks that will allow the satellites to communicate with one another while in orbit. But they represent the first big step towards the company’s long-range plan. By 2027, SpaceX plans to have as many 12,000 Starlink satellites in orbit beaming high-speed internet to tens of millions of customers around the planet.

The history of satellite internet, however, is defined by failure, including one of the largest corporate bankruptcies in history. This was a reality Elon Musk candidly acknowledged to reporters ahead of the Starlink launch. “No one has ever succeeded in making a viable low earth orbit communication constellation right off the bat,” Musk said. “I do believe we’ll be successful, but it is far from a sure thing.”

Failure can come in many forms. SpaceX will face stiff competition from other satellite operators and terrestrial broadband providers, huge regulatory hurdles, and at the end of it all may find that the demand for satellite internet just isn’t what it thought it would be . In short, entering the satellite broadband market is a big risk. Yet SpaceX might not have another choice. Musk has made it clear that SpaceX’s ultimate mission is to send humans to Mars , but the price tag on that will be astronomical. A 2014 NASA study put the cost of a human mission to Mars in the ballpark of $220 billion. SpaceX’s revenue from launch contracts alone, which Musk said shakes out to about $3 billion annually, is unlikely to get anyone to the Red Planet.

As detailed in a 2016 revenue projection obtained by the Wall Street Journal, SpaceX estimated that by 2025 its launch services would be pulling down approximately $5 billion in revenue, which was dwarfed by the projected $30 billion for its Starlink internet services. The company hasn’t released any details about the price structure for its internet service or how much ground stations for users will cost. But the fate of past efforts to launch internet satellite constellations, as well as probable future developments, suggest that SpaceX may need to adjust its rosy expectations.

Broadband satellite internet in the US has historically been dominated by two companies, Hughes Network Systems and ViaSat. Their satellites are in geosynchronous orbit, which means the satellites never change position relative to the surface of the Earth. Although Hughes estimates that there are roughly 15 to 18 million unserved or underserved households in the US, Hughes and ViaSat only have about 2.5 million satellite internet customers.

The reason Hughes has not garnered a larger customer base has to do with capacity and economics, says Paul Gaske, the executive vice president of Hughes. Hughes only has two broadband satellites offering service in the US, and to attract more customers it plans to add another satellite to its fleet in 2021. But the bigger issue is likely to be the prohibitive cost of the service.

In the US satellite internet primarily appeals to rural households not served by fiber or cable connections. Internet service from geosynchronous satellites is subject to high latency, though, because the signal has to travel across thousands of miles of empty space and back again, which can result in delays of up to half a second.

Starlink and its competitors, such as OneWeb, Telesat and Amazon’s Project Kuiper, have embraced a new approach to satellite internet. Rather than placing a couple big satellites in geosynchronous orbit, these companies want to place thousands of broadband satellites in low Earth orbit. These satellites are only a few hundred miles above the Earth so they can cut down delays to around 20 milliseconds, which is hardly noticeable from a user’s perspective.

As a satellite internet operator, one of SpaceX’s biggest challenges will be differentiating itself from other broadband constellations that will be operating in low Earth orbit, says Roger Rusch, president of TelAstra, a consulting firm that advises investors in the satellite industry. In addition to Starlink, OneWeb and Telesat have both announced their intention to create LEO broadband constellations with 650 and 292 satellites, respectively. In February, OneWeb launched its first batch of six satellites. Shortly thereafter, Amazon announced Project Kuiper, which will place 3,236 broadband satellites into low Earth orbit.

Getting satellites into orbit is arguably the easy part of creating broadband satellite mega-constellations. The real difficulty, and where costs quickly skyrocket, is on the ground. In April, SpaceX received FCC approval for one million ground stations, which will be used by customers to communicate with the satellites passing overhead. Unlike the immobile satellite dishes used to connect with geosynchronous satellites, which only need to point at a single part of the sky, SpaceX’s phased-array antennas track satellites as they pass overhead.

These sorts of antennas will likely be expensive for customers, says Rusch. Given that affordability is already one of the biggest barriers to internet adoption, that could be a major obstacle for SpaceX. SpaceX will also have to absorb significant costs to build and run satellite gateways, which are basically large switching stations where satellites connect to the internet backbone. In April, SpaceX received permission from the FCC to build four satellite gateways around the US, but as it takes its service global, it will also have to build several of these stations abroad.

This raises the question of whether there will be enough of a market to support one, much less four, multi-billion-dollar satellite mega-constellations. Although Starlink, Telesat, OneWeb, and Project Kuiper all aspire to connect the world, there may not be enough people who can afford their services. “Is there enough demand in the world for all that capacity coming online over the next 10 years? No one really knows,” says Matt Desch, CEO of Iridium, a satellite communication company that focuses on voice and data. “The investment markets are clearly concerned, which is why these new markets are being slow to be funded, at least by the public equity and debt markets.”

Carissa Christensen, CEO of the analytics firm Bryce Space and Technology, pointed to O3B, the satellite internet company founded by OneWeb CEO Greg Wyler in 2007, as an example of what can happen. Although O3B aimed to bring “the other three billion” people without internet access online, the market simply wasn’t there. These days, O3B supports itself by providing satellite data services for maritime operations, which Christensen says underscores the point that “transformational visions are not necessarily going to translate into a realistic business model.”

SpaceX will also have to compete with terrestrial internet providers. Even if SpaceX can lower its latency to around 20 milliseconds and match the average US internet download speed (around 93 megabits per second), the arrival of 5G could undermine its business. The eventual promise of 5G is to bring bandwidths of 10 gigabits per second to your phone. A lot needs to be done before 5G becomes a reality , but even on the slowest 5G development schedules it will likely be deployed before the 2027 deadline for SpaceX to finish its Starlink constellation. “My view is that these LEO constellations are totally uneconomic,” Rusch says.

Of course, Musk has never been one to shy away from big challenges. This is the guy who created companies that openly defied all conventions in the banking industry, auto industry, and aerospace industry, markets that any analyst would’ve told you were impossible to disrupt only a decade ago. By all accounts it seems that SpaceX will have to fight to establish market dominance in satellite broadband, especially if the goal is funding a Mars mission. It’s going to be hard, but then again, nothing in space has ever been easy.