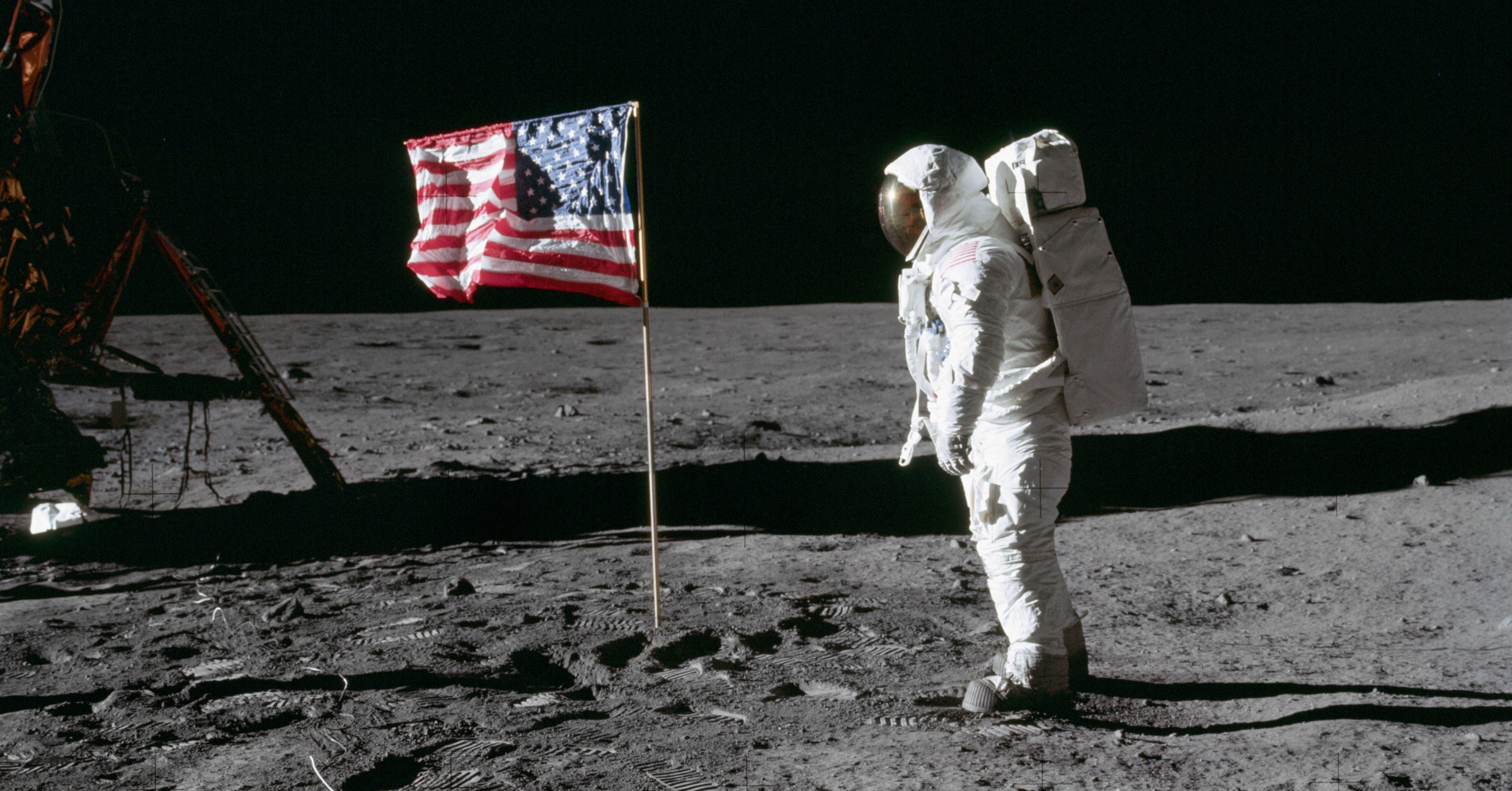 This story is part of a series commemorating the 50th anniversary of the Apollo 11 mission .

When Marc Antony’s troops allowed their Parthian enemies to set their siege line on fire in 36 BC, their enraged com­mander knew what punishment they deserved. As told by the Roman historian Livy, he “visited those who had played the coward with what is called decimation.” He divided them into groups of 10. In each group, nine soldiers were issued rations of barley instead of wheat, an insult to their honor and nutrition. The tenth man, chosen by lottery, was executed.

Reserved for cowards, mutineers, and the like, decimation in Antony’s world meant removal of a tenth. Today it’s used to describe total annihilation. Of course, it’s not the first word to slip its specific meaning and enter broader usage. Fifty years after Neil Armstrong walked on the moon, planted an American flag, and flew home, the term moon shot has become shorthand for trying to do something that’s really hard and maybe a bit crazy.

President Barack Obama launched a moon shot to cure cancer. Democratic presidential candidates Kirsten Gillibrand and Beto O’Rourke have called for moon shots to stop climate change. Yahoo CEO Marissa Mayer once said her moon shot was to get her products "on every smart­phone, every tablet every day, for every internet user." The Global Wellness Institute’s Wellness Moonshot aims to eradicate preventable, chronic diseases. All of them. And of course, Google X—now the Alphabet subsidiary known simply as X—runs what it calls a Moonshot Factory™, pouring investors’ money into self-driving cars, internet-slinging balloons, and similarly loony projects.

Apollo 11 , the Moon, and the Future of Space Exploration

Like the original moon shot, these are big, hard problems that demand significant investments of time and money, along with innovative technology and thinking. But these projects differ in two critical ways. First, they demand nowhere near the resources the United States used to reach the Sea of Tranquility. To make good on John F. Kennedy’s pledge to land a man on the moon and bring him home by the end of the 1960s, NASA spent $25.4 billion on the Apollo program—more than $150 billion in today’s dollars. At its peak, Apollo accounted for nearly 4 percent of the federal budget. More than 400,000 Americans worked on it in some capacity, nearly all of them in private industry.

In 2016, Congress allocated $1.8 billion over a seven-year period to fund Obama’s Cancer Moonshot . Even Google, for all its innovation-minded largesse, shies away from writing such big checks. In a recent essay, historian Thomas Haigh lambasted X chief Astro Teller and Silicon Valley as a whole for “stealing” the term moon shot. Haigh focused on a TED talk in which Teller said that X had abandoned an airship project after realizing the first prototype would cost an unacceptable $200 million. “Teller’s pragmatic, iterative, product-driven approach to innovation is the exact opposite of what the US did,” Haigh wrote. That is, it spent all the money and manpower necessary to make good on a slain president’s promise and give the Soviets what for.

Second, today’s moon shots fail to match the targeted specificity of the original. In his 1961 speech to Congress, Kennedy allowed for no ambiguity: “This nation should commit itself to achieving the goal, before this decade is out, of landing a man on the moon and returning him safely to the Earth.” After Obama announced his cancer initiative in the 2016 State of the Union address, Ars Technica’s Jonathan Gitlin argued that a short-term cash infusion is a bad way to fund science, in part because ending cancer is a “nebulous concept” with no clear path to success. Cancer is not a single disease, and its many forms require many approaches to treatment and prevention. A climate moon shot, if funded, would face the same problem: How do you define the goal, and how do you measure success?

Deploying a driverless car is a clearer target than stopping climate change, but not by much. In the 10 years since Google launched the effort that’s now known as Waymo, the self-driving industry has collectively realized that the initial dream—the car that can go anywhere, anytime—will remain a fantasy for the foreseeable future. Any viable system will work by virtue of staying within a narrow use case. That’s why the question isn’t when self-driving cars will arrive, but where and in what guise.

That is not a critique of autonomous driving developers or those aiming to fix the planet and save lives. But if the model of America’s lunar triumph is to mean anything more than “a hard thing,” these efforts are no moon shots.

Perhaps that doesn’t matter. The very term moon shot may not have originated with the Apollo missions, but in the Los Angeles Coliseum, in the 1950s. When the Dodgers moved to California from Brooklyn, they spent their first few seasons on a diamond awkwardly jammed into the oval football stadium. To limit home runs over the historically short left field fence, the team installed a 42-foot-high wall. It wasn’t enough to stop Wally Moon, the young outfielder who adjusted his swing to hit unusually high fly balls to left. The local press referred to the resulting homers as “Moon shots.” (Given the man’s facial hair situation, he could just as well have inspired the term “moonibrow.”)

If we accept that the meaning of moon shot transitioned from baseball to space exploration, why shouldn’t it change again? This is how language works, after all. Literally becomes figuratively. Archimedes used myriad to say 10,000; today it mostly means “a whole lot.” You can decimate things other than disappointing Roman legions. So why not embrace moon shot as a metaphor rather than a directive, an inspirational shorthand for pouring energy and resources into a nasty problem?

Because we can do better. Today’s projects shouldn’t be called moon shots, not because they fail to meet the definition, but because they exceed it. Cancer, climate, cars, they demand more than a single mission accomplished. They demand more expansive and careful thinking, and follow-through. The places where, arguably, the real moon shot fell short.

In the 1960s, plenty of people grumbled about the cost of leaving Earth, but many more found inspiration in the race to shed humanity’s earthly shackles. The popular imagi­nation conjured life on the moon and other planets, the conquest of the solar system launching a new age of explo­ration. But after July 20, 1969, the US went back to the moon a few times (once to play a round of golf), and that was pretty much it. After meeting JFK’s goal, NASA shuttered the Apollo program early and Richard Nixon slashed the agency’s budget and aspirations. The US helped build the International Space Station and ran the troubled Shuttle program, but anyone who had hoped for a colony on the moon had to settle for a flag that would soon turn white and then to dust.

“The Apollo program did little to directly advance scientific understanding,” Haigh wrote in his essay, arguing that NASA chose “to meet arbitrary deadlines by rushing special-purpose hardware, rather than maximizing the scientific value of the missions.” Others have made the same point. At stake for the US was more than making good on a lost leader’s promise. The Space Race was just one more front in the Cold War. As each superpower worked to win various “third world” countries to its side, a moon landing would be a powerful argument in either’s favor, says Teasel Muir-Harmony, curator of the Smithsonian National Air and Space Museum’s space history department. Once the US had checked the box and reaped the political rewards, it saw no need to keep running.

Today’s great challenges don’t have such clear-cut finish lines. Curing cancer, stopping climate change, eliminating human driving—these are too broad to be moon shots. They require ecosystems of innovation. In the decade since Google first displayed its self-driving car, an entire industry has emerged to help make it a viable commercial product, and thus a world-changing one. Fleet operators and lidar makers are hawking their wares. Lobbyists, lawyers, and insurers are studying up. Universities, established and newfangled, are pumping out engineers. Some will perish; contractions always follow explosions. But while a shot is limited by one direction and destination, a detonation has the helpful habit of going everywhere at once.

Leave moon shots to the Dodgers and astronauts of old. We want enduring, expansive victories. We need moon booms.

More Stories on Apollo 11 and the Moon